Bees, Butterflies and interpreting the theme 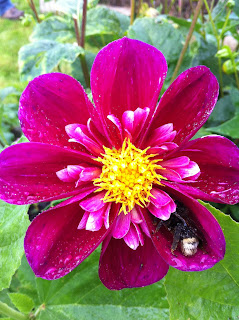 Well it has occurred to me that perhaps I have been a little hasty. A forest garden is a great idea but where will all the flowers be? Once the fruit blossom is over there will be very few and excited as I am about the forest garden concept, I love to have colour all through the season. So, having been entranced by Sarah Raven's series about attracting pollinators to the garden, I have decided that I am going to reinterpret the forest garden theme in order to bring in the insects to the garden and in the long term, help good fruit set!

So what does this mean? Well actually its really good news I think. It means I can still have Dahlias as long as they are single blossoms that have plenty of nectar like the one above, taken at Oxford Botanic Garden last summer, along with its visiting bee. I can also have zinnias, sunflowers, cornflowers, and ammi to name but a few along side pots of annual meadow mixes which I shall trial to see which attracts most of the good guys that we want.

Now I genuinely know this will help to pollinate the fruit I am also going to grow. At work we have bee hives. looked after by a great guy by the name of Arnold who is utterly adorable. Pre bees we grew fruit on the nursery and we had a reasonable amount of fruit each year. However, since the bees something little short of miraculous has taken place. The apples, pears and nectarines have all fruited like crazy as have the grapevines and kiwis. Plus we have seen an increase in birds, with all 9 of our small bird boxes used last year and several nests in heating ducts and trees and last year we found Great Crested Newts in one of our glasshouses. Already this year we've seen birds looking at the boxes and today the bees were flying around and we had hoverflies dancing around in the Daphnes which I have realised, smell like lemon sherberts.

So by growing the right plants to attract in the good guys I'll have great fruit set and hopefully a garden that has enough biodiversity to look after itself and see of any bad guys that might try to come in. I will, of course, report back!! 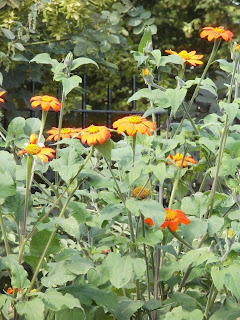 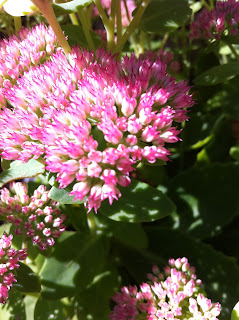