The most interesting non-Higgs results coming from the LHC in 2011 was the observation CP violation in neutral D-meson decays delivered by the LHCb collaboration. Recall that LHCb studied the decays of the D and anti-D mesons into a pair of charged pions and a pair of charged kaons. For each D → π+π- and D → K+K- one can measure the decay rate, and subtract the analogous decay rate of anti-D (and normalize by the sum), thus obtaining the asymmetries A(π+π-) and A(K+K-). If either of the asymmetries is non-zero, that means the particular partial decay width is different for the particle and the anti-particle, which is a signal of CP violation. Since the total number of D and anti-D produced in LHC collisions is different and hard to estimate, LHCb quoted only the difference of the asymmetries ΔA = A(K+K-) - A(π+π-) where that uncertainty cancels out. They found ΔA = (-0.82 ± 0.24)%, significantly away from zero, which constituted the first evidence for CP violation in the charm sector at the level of 1%. What distinguishes this result from 1000 other flavor physics observables presented by the LHC, Tevatron, and B factories is that, until last year, theorists expected Standard Model processes to provide much smaller contributions to the CP asymmetry in D meson decays, estimates lying in the ballpark of 0.01-0.1%.

Exactly the same processes can also be studied at the Tevatron. CDF measured the same observable last year even before LHCb (they also gave separate CP asymmetries for the π+π- and K+K- final states), but at the time no statistically significant CP violation was observed. Now CDF has an update using the full Tevatron data set of almost 10 inverse femtobarn. They find ΔA = (-0.62 ± 0.23) % which is 2.7 sigma away from zero. This is an independent confirmation of the LHCb result. Combining all experimental measurements of CP violating observables in the D meson sector one arrives at the following graph 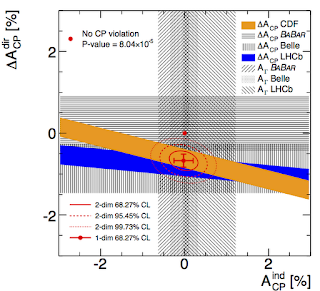 One can read off that the world average of the direct ΔA = (-0.67 ± 0.16)% is clearly non-zero, while there's currently no hint of the so-called indirect CP violation in D-Dbar meson mixing. Thus, we now know for sure CP is violated in decays of D mesons, an interesting fact in itself. However, we're still in the dark whether this result is a signal of new physics beyond the Standard Model, or just an unexpected enhancement of some difficult-to-calculate Standard Model contributions. I wish I could say that more data will clarify the situation, but even that is not clear at the moment...