Effective Cross-Section of a Dipole Antenna

Over the last couple of weeks I’ve been doing some pretty rough calculations to figure out the radiation from an oscillating charge. I’ve been in the ballpark, but today I think I’m like to get it right on the money. This is a calculation I figured out just over twenty years ago, and I’m pretty sure you won’t see it anywhere. I sketched it out last year in this article on the Crystal Radio, but I never did the numbers. That will be today’s project.
So far we’ve worked on the Larmor Formula, which gives you the radiation of an accelerating charge, and we’ve also tackled the radiation resistance of a short dipole. A charge in sinusoidal motion is just a special case of an oscillating charge, and I worked out a geometric argument which shows how to convert this case to an equivalent short dipole antenna. So these two formulas are really different versions of the same thing. Today I’m going to do a third version, which is also equivalent: the effective cross-sectional area of a small receiving antenna. If we know the power carried in the wave, this cross-section gives us the same information, in terms of absorbed power, as the radiation resistance. So if we know one, we know the other…in fact, we know all three.
The key to the calculation is this picture (see below), showing the interference of two wave patterns. The plane waves, moving from left to right, represent the incoming power from a distant transmitter. The circular waves, moving outwards, represent the response of the receiving antenna. What you have to understand is an antenna becomes a receiver by being a transmitter. The key is the shadow zone I’ve shown, where the two wave systems are close enough to be in phase with each other. 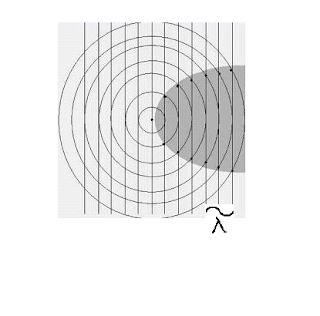 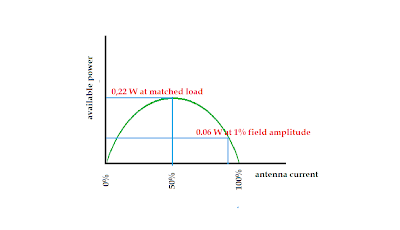 You can see that the maximum useful power you can capture with this antenna is 0.22 Watts. SInce we are working with unit power density (1 watt/square wavelength) that also happens to be the amount of power flowing through 0.22 square wavelengths, and so we call that the absorption cross-section. Or we can also talk about the scattering cross-section, which is basically when you short-circuit the antenna and maximize the current. That’s of course four times as much power. (You can see why from basic circuit theory and load matching!) Either way, once you’ve got the cross-section, you’ve implicitly determined the radiation resistance. You just have to convert wave power to volts-per-meter, mutliply by the length of the antenna, and push your numbers around until everything agrees with everything else.
Actually, looking it up on Wikipedia I see they give an actual cross-section (they call it “effective aperture) of 0.11 square wavelengths, which is just half of what I got. It’s not surprising I’m out, since I used the coarsest imaginable approximation for the effective cross-section of the shadow zone. There’s an integration that gives me an exact value, and oddly enough, in this case I’m actually capable of doing the calculus. It’s just that the math tends to get in the way of the physics, and it’s so much easier to describe what you’re doing when you keep it simple.
Still, I promised I was going to try and get this one exact for a change, so maybe we’ll come back tomorrow and see if we can’t work in that missing factor of 2.
di 14.04