Many a time I have stressed on this blog that neutrinos are boring, though I should specify that they are boring from the point of view of a theoretical physicist. For experimentalists, on the other hand, neutrinos are first of all annoying. Indeed, taking part in a neutrino experiment seems the shortest path to trouble, because of weird anomalies affecting every other experiment. Although the most notorious anomaly - the phantom of OPERA - appears to be dead and buried, there remain several spooky effects observed by other experiments. Here is a list of the most interesting neutrino anomalies that to date have not been explained away. 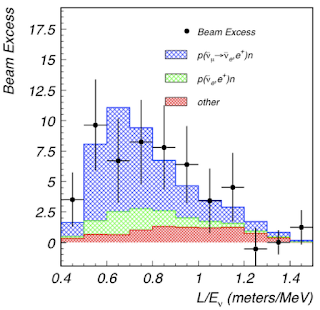 LSND anomaly. The mother of all neutrino anomalies. The LSND experiment in Los Alamos was shooting a beam of 20-200 MeV muon antineutrinos and looking for an appearance of electron antineutrinos in a detector 30m away. They saw a clear excess of electron antineutrinos which at the time was being interpreted as the first evidence of neutrino oscillations. However, the LSND result would correspond to a neutrino mass difference of nearly 1eV, whereas subsequent experiments (Super-K, KamLAND, SNO) demonstrated that, although the 3 Standard Model neutrinos can indeed oscillate one into another, the mass differences are much smaller than suggested by the LSND. The LSND result thus cannot be explained with 3 active neutrinos, although it may fit in a larger framework with one or more sterile neutrinos. 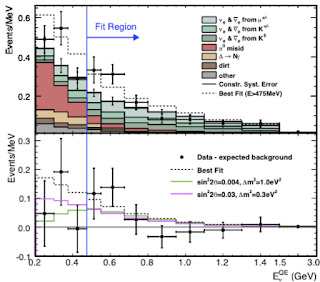 MiniBoone anomaly. Conceived as the ultimate test of the LSND anomaly, with a larger baseline (540m), larger neutrino energies (0.5-3 GeV), but a similar L/E. The Miniboone experiment in Fermilab was also looking for an appearance of electron neutrinos in a beam of muon ones, moreover it had a button to choose between neutrino and antineutrino beams. One clear result was a refutal of the simple 2-neutrino oscillation interpretation of the LSND signal, as nothing was seen in the signal region in the neutrino mode. However, the experiment saw a weird excess of electron-neutrino-like events at low energies, in the neutrino mode below, and in antineutrino mode just above their analysis threshold. Again, there may be a more complicated framework with several sterile neutrinos where these results can be accommodated. In preparation is the MicroBoone experiment which will be the ultimate test of the MiniBoone anomaly. 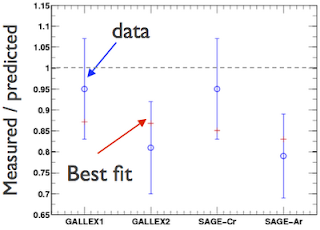 Gallium anomaly. The least known of the neutrino anomalies. The GALLEX and SAGE collaborations were gallium-target radiochemical experiments focused on studying solar neutrinos. For calibration purposes, they measured the flux of electron neutrinos produced by artificial radioactive sources placed inside the detectors. They found the observed-to-expected flux ratio to be 0.86 ± 0.06, as if some of the neutrinos were vanishing by oscillating into sterile ones. 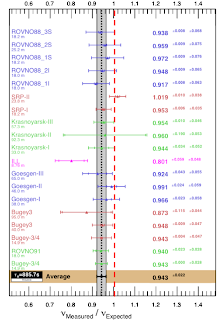 Reactor anomaly. An oven-fresh neutrino anomaly based on ancient experimental results. Over the years several detectors located near nuclear power stations all over the world measured the flux of electron antineutrinos emitted from the reactors. At the time none of them noticed anything unusual, on average the flux was maybe 1 sigma below the expected one. However, a recent progress in modeling nuclear reactions led to a reevaluation of the neutrino energy spectrum and emitted power, which increased the expected flux. Therefore, the short-baseline reactor neutrino experiments now face a deficit of the neutrino flux: the observed to expected rate is 0.943 ± 0.023, roughly a 2.5 sigma discrepancy. Again, are electron neutrinos rapidly oscillating into sterile ones, thus vanishing from our sight? The reactor anomaly will be soon tested by an experiment with the ominous name Nucifer, located 7m from the reactor in Saclay.

As you can tell, the neutrino anomalies described above are not as spectacular as breaking the speed of light, but for exactly this reason there is a better chance that at least one of them is trying to tell us something about the real world… Are they signals of unexpected new physics, or just a manifestation of difficult to control systematic effects inherent in neutrino physics? The latter is of course far more likely, but nevertheless it will be interesting to follow the updates.

I borrowed heavily from a seminar of Guillaume Mention, slides here.
di 01.33