Yesterday I said I couldn’t get the radiation emission from hydrogen to come out correctly, using classical antenna theory. Does this mean that atoms do not behave like classical antennas? Possibly. The other possibility is that I was messing up the calculation. Which could it be?
Eventually, in desperation, looked up the formula for the radiation from a charged body moving in a uniform circular orbit. It’s called the Larmor Formula, and it’s a little more general than that: it claims to give the radiation for any acclerating motion. I adapted the atomic equations to the case of uniform circular motion, and I got exactly the right amount of radiation. The semi-classical picture agrees with the Copenhagen picture.
So why wouldn’t the antenna equations work? That’s a tough one, but I think I have the answer. The proper thing for me to do now would be to show you how its done correctly, but I can’t bring myself to do that. For some reason, I feel I have to first show you how I did it wrong. A though you were to somehow be in danger of making the same mistake as I did. So here goes:
Everybody knows that the radiation resistance of a half-wave dipole antenna is 73 ohms. Right? I mean, we have to start somewhere. I actually did a calculation a couple of months ago to justify those 73 ohms. It wasn’t really a very good calculation, but it kind of at least gets you in the ballpark. I actually have a much better way of doing it, where you can actually see the physical basis for what's happening, but again it's just a ballpark calculation. The three-dimensional calculus is just too hairy, so I have to take some shortcuts. Someday I'll write it up and post it.
But for today, I'm actually going to just use a formula we can find on the internet. It's not the formula for the half-wave dipole, it's the more general formula for the short dipole, where by "short" we mean much shorter than the half-wave. Since atoms are on the order of anstroms, and they emit light in the optical or (at worst) ultraviolet spectrum, this qualifes them as "short" dipoles. And as such, we can use this formula for their radiation resistance: 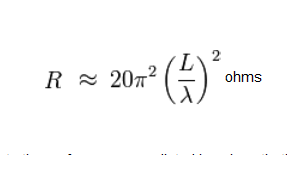 You can check this formula for the case of lambda = 1/2: you see it gives you a value of about 50 ohms, which is a little on the low side. That's because the half-wave dipole is a little more focussed than the short dipole. It makes sense.
Now we can plug our numbers in and see what to expect for the power output. First, compare the radiated wavelength to the atomic dimension. We already noted that the wavelength is 120 nanometers, and the dipole moment is 8 picometers. Actually, that's not quite the right figure to use for the ratio: that's the one-sided  moment, so we should double it up for full distance the charge travels. And that's not all either. What is the dipole moment of a short electrical antenna? Is it equal to its full length? Not really. In a small dipole, the current distribution is such that you get a uniform distribution of charge, equal and opposite, on the two legs of the antenna. The center-of-mass of an equal distribution is half-way along the length: so the dipole antenna which has the same moment as the atom should actually be twice as long. All together, I get a length of 32 picometers. I think this is right.
From the ratio of these two lengths, using the formula you should calculate a radiation resistance of
about 12 micro-ohms. Now we just have to figure out the current and plug everything into the formula "power equals i-squared-r".  Are you ready?
di 16.05