The equivalent antenna of an atom

Here’s the problem we were working on when I left off yesterday. I wanted to use the classical antenna equations to calculate the amount of radiation from a hydrogen atom. Specifically, I was looking at the s-p transition, at the point where the atom was just 1% excited. I already showed that the classical calculation gives you the same radiated power as you calculate Copenhagen-style with the Einstein A coefficient and Fermi’s Golden Rule. I got it to come out exactly right using the Larmor Equation for the radiation from an accelerating charge. I was just having some trouble getting the same result from the antenna equations.
It might seem like a small point, but it turns out to have huge consequences for me, which I’ll get to at the end of this post. But let’s start off by remembering where we were yesterday. The Schroedinger equation of .995*s + 0.1*p (that’s an atom excited to the extent of 1%) gives me an oscillating dipole moment of 8 picometer-electrons. I did some rough geometry to equate this to a dipole antenna 32 picometers in length. I wasn’t very explicit about how I got that, but it’s a fairly straightforward geometrical argument using moments. Here is a picture of how it looks: 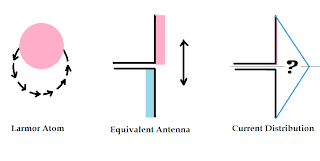 The first picture shows the Larmor Atom, which is pretty close to the actual atom except it's oscillating in two dimensions instead of one. You can see that I've drawn an equivalent antenna with the same dipole moment; I hope it's clear why the first one has a radius of 8 picometers, and the second one has a length of 32 picometers. They both have the same oscillating dipole moment.
So if that's my equivalent antenna, it should be pretty easy to use the antenna equations. I showed yesterday that for the frequency in question (2.5*10^15 Hz) you get a radiation resistance of about 12 micro-ohms. So all you need is to put the current in and calculate i-squared-r. But that's easy. The current is just the charge times the frequency, right?
Wrong! That's what was screwing me up so bad. It's actually really tricky to figure out the equivalent current. I finally worked it out like this: 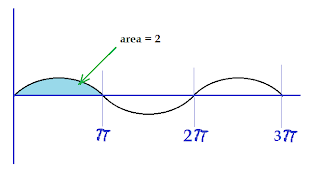 This graph represents a sinusoidal current with unit amplitude. It delivers a total charge of 2 coulombs in pi seconds. The frequency is 1/2*pi and the charge is 2. If I said that the current was just the charge times the frequency (which is what I said it would be yesterday!) I would calculate a current of 1/pi. But that means I'd be out by a factor of pi!
It's worse than that because I also forgot that the antenna formulas are written in terms of RMS currents...the electrical engineers's standard. Which throws me out by another factor of sqrt(2). It turns out that the two errors are in opposite directions, so the compound error works out to 2.2. Since current is squared in the power formula, this gives me a factor of 5. Which is exactly the amount I was out by.
There's no reason to torture you by walking you through the numbers: you can do it yourself if you really care. The point is it came out perfectly. The antenna calculation agreed with the Larmor formula, which agreed with the Fermi Golden Rule calculation. So everything was fine after all.
But then it hit me: exactly one year ago, I was trying to do a similar calculation where I equated the mode energy of the electric field in a cavity to the mode energy of a mechanical oscillator. It was a very cool calculation but no matter what I did, my numbers were still out by a factor of ten! Could it be the same error,  and if so, was it in the right direction? I'd hate to go and fix it up only to find that now I was out by a factor of fifty or a hundred.
When we return, I'm going to check this out.
di 20.02