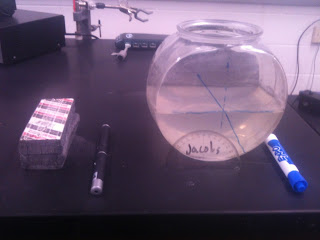 Yeah, please feel free to pay $50-$200 for fancy refraction tanks from science supply companies.  I've gone that route myself -- twice -- but I discovered  that the flimsy pieces of junk lasted only a year or two performing as advertised.  You can get the same results with a goldfish bowl from the pet store.
I introduce the concept of refraction using the "4-wheel-drive vehicle* in the mud" analogy.  If one drives a pickup truck at an angle from a paved surface into mud, the truck's path bends simply because it slows down in the mud.  Similarly, light bends when traveling from one material to the next because its speed changes.  While light doesn't have tires, the muddin' analogy is sufficient to predict the direction of refraction, i.e. toward or away from normal.
* I teach at a boys' school in the South.  It's pronounced "vee-HICK-uhl."  And it has floodlights and a gun rack.
Next I introduce the index of refraction and Snell's law.  We imagine light incident from air to water at a 40 degree angle.  We calculate from Snell that the transmitted ray will be 30 degrees from the normal -- good, since the muddin' analogy suggests that since light slows down from air to water, the light should bend toward the normal, and thus the angle of transmission should be less than 40 degrees.
Thing is, all we've done so far is imagine and calculate.  I want to see this light bend, and measure 30 degrees from normal.  Here comes the fish bowl.
The picture above shows a fish bowl half filled with water.  Key point:  A dry-erase marker writes and erases on glass just as well as on a dry-erase board.
I have a student mark the water surface with the dry-erase marker.  Then he uses the protractor to mark the normal to the surface with a dotted line,* and a line at a 40 degree angle to the normal representing the incident ray.
*Watching otherwise brilliant AP physics students attempt to construct a perpendicular line segment with a protractor can be an amusing distraction.  You'd think I'd asked them to use nothing but a compass.  P.S. Do *you* remember how to use a compass to construct a perpendicular?  And how much is added to my nerdity score because I do remember?
The chalk erasers to the left of the fishbowl are clapped together so as to visualize the laser in air.  (A drop of coffee creamer allows the laser to be seen in the water.)  I hold the laser steadily so that in air the laser travels along the 40 degree line as drawn.  The student now traces the path of the ray in the water; the result can be seen in the picture.
Finally, a student measures the angle of the refracted ray with the protractor.  We always get within a few degrees of the predicted 30 degree angle.  Physics works.
The fish bowl works exactly like the expensive refraction tank.  And the fish bowl allows us to do the same experiment with the light originating in the water:  Since the tank is curved, I can just shine the laser in from the bottom, and I get light traveling from water to air.
GCJ
di 13.45