The Moriond conference is now unfolding up on the slopes of Mont Blanc. The real action -- the Higgs update from the LHC and the Tevatron -- will happen only on Wednesday. However, as in any other 007 movie, there is a teaser before the opening credits. On the previous week another conference known as the Italian Moriond took place in the same room of the same hotel on the same ski slope. It included the talk by Homer Wolfe that uncovered many details of the upcoming CDF Higgs analysis, although stopping short before the final shootout, that is before giving away the new Higgs limits.

There hasn't been much expectation about the upcoming Tevatron Higgs update . That's because the previous Tevatron combination is based on up to 8.6 fb-1 of data and doesn't show much in the interesting mass range: only a broad 0.5 sigma excess near 125 GeV and the limits on the Higgs production rate at the level of twice the Standard Model cross section. Naively, adding 1 more crappy femtobarn should not change much, unless dramatic improvementd in the analysis. have occurred.

Now, CDF claims that they do have a dramatic improvement!

The most revamped analysis is the one where the Higgs boson is produced in association with a W or Z boson and decays into a pair of b quarks. Much as at the LHC, W/Z+H is not the main production channel at the Tevatron. However, the charged lepton and/or missing energy from W/Z decay give a chance to trigger on the event, and thus pick the H → b bbar signal from the overwhelming QCD background. Luckily enough, W/Z+H is also the last channel where the Tevatron is still highly competitive with the LHC (the latter has to fight a much larger QCD background in this channel, and only later this year it will reach a sensitivity comparable to that of the Tevatron). The news is that between now and last summer CDF has largely improved their 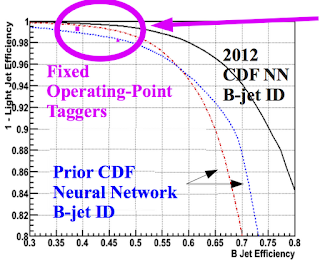 b-tagging, with the efficiency gains reaching 40%. This is of double importance in low mass Higgs searches, as signal events contain two b-jets. Combining that with other smaller improvements, CDF expects to see twice as many signal events in the interesting mass range compared to the previous analysis. Correspondingly, the expected sensitivity for exclusion is now at about 1.4 Standard Model cross sections near 130 GeV, tantalizingly close to where the signal should pop up. 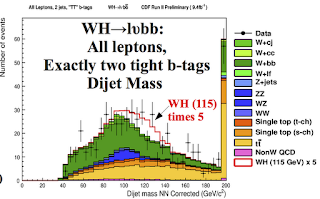 Actually, CDF went as far as to showing the distribution of the invariant mass of the b-jet pairs in the events that pass the latest selection in the W+H channel. In theory, that distribution should have a peak at the true value of the Higgs mass, although the peak will be badly smeared due to large uncertainties inherent in measuring the energy of b-jets. One thing that is clear from the plot is that the Tevatron won't teach us anything new about the Higgs boson mass: any excess is expected to span many mass bins and it may be hard to tell the 115 GeV signal from the 130 GeV one. Another thing that is visible, at least to a naive eye, is that the plot shows.... an excess of Higgs-like events in the interesting mass range. Without an insider analysis it's of course impossible to say what that really means in terms of the signal significance, but it's not impossible we will be pleasantly surprised on Wednesday...
di 05.45