Is it attraction or repulsion?

I really opened a can of worms when I decided to talk about induction motors. I left off yesterday with the unanswered question: is the rotor pushed by the stator from behind, via magnetic repulsion, or is it dragged along by the force of attraction? The more I think about it, the more disturbing it gets.

I'm going to start by going right back to the basic operation of a transformer. I've drawn a picture of a transformer with two windings, primary and secondary. I'm showing the iron core to be cut in two places, so it has air gaps just like a motor. The primary side winding represents the stator winding, and the secondary winding on the floating part of the core represents the rotor: 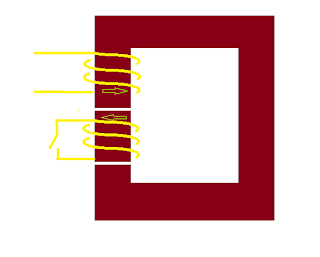 I've shown a switch in the rotor winding, so we can imagine what happens if we don't allow current to flow. Let's apply 120 volt AC power to the primary. We know that inductive current flows through the coil; by "inductive", we mean that the current is 90 degrees out of phase with the voltage, and that it is lagging rather than leading. This current creates a magnetic flux that goes all the way around the iron core, jumping across the air gap in two places. The magnetic flux is oscillating sinusoidally, and in doing so it generates a voltage. In fact, it generates the 120 volts needed to balance the applied voltage, and it generates it everwhere throughout the iron core. In an ordinary motor or transformer, it doesn't take an awful lot of magnetising current to generate this back-voltage. And make no mistake, it's a real voltage: we can measure it if we like with a voltmeter across the switch on the secondary winding. (Actually, it's 40 volts compounded over three loops as I've shown in the picture. If I only drew two loops on the secondary side, you would measure just 80 volts.)

What can we say about the magnetisation of the iron? Since the flux is going the same direction everywhere, the poles line up across the air gaps: in other words, if there is a North pole during the positive half of the AC cycle, then it faces a South pole across the air gap, and vice versa. The poles are always opposite, so they attract each other.

Here's where it gets messed up: the primary and secondary currents are flowing in opposite directions, and opposite currents...repel! Yes, I know that opposites "attract", but that's just for charges. (And sexes.) Opposite currents repel, and like currents attract. Yes, current is gay.

Before I closed the switch, I looked at the magnetisation of the iron and I had North facing South. It lookes like attraction. But now, when I let currents flow in the secondary winding, I get opposite currents facing each other. Opposites repel. So what's it going to be...attraction or repulsion.