There's been another dump of SUSY results on ATLAS public pages, with several search channels updated to 5 inverse femtobarns. The update includes the vanilla jets + missing energy search where ATLAS looks for events containing a number of energetic jets and displaying a large unbalanced transverse momentum. This is the most generic signal of supersymmetry when the lightest SUSY particle (LSP) is weakly interacting and escapes detection; ultimately, any such model should produce an excess in the jets+MET search. For example, a squark may decay to a quark and a neutralino LSP, or a gluino may decay to 2 quarks and a neutralino LSP, so a pair of squarks/gluinos typically produces a signal with 2/4 jets and missing energy (sometimes more, if colliding partons radiate additional jets, sometimes less, if a jet gets lost in a crack). In this note ATLAS focuses on events with the number of jets between 2 and 6. The money plot is this one: 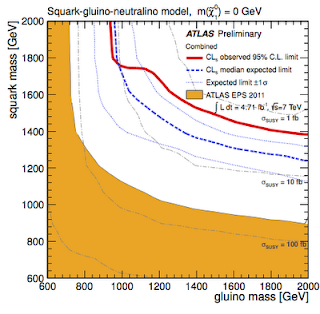 It shows the parameter space of a simplified SUSY models where the only particles are 1st and 2nd generation squarks, a gluino and a massless neutralino. If the squarks are outside of the LHC reach the lower limit on the gluino mass is now above 900 GeV, whereas if the squarks and gluino have comparable masses the limits on both are approaching the impressive value of 1.5 TeV. ATLAS has been lucky with the background and therefore in most of the parameter space the limits are somewhat better than expected (in spite of an excess in one category with 4 jets). One can see that we're running out of the parameter space, as the plot legend barely fits the allowed region.

ATLAS also prepared 5 fb-1 updates of multijet and 1 lepton + jets SUSY searches. Those are less sensitive in a generic case, but for some specific SUSY spectra they could provide more stringent limits than the vanilla jets+MET search. No excess in either.

On the other hand, one should note that limits on the masses of the superpartners of the top quark still do not exist in a robust form. It is logically possible that the stop masses are relatively small, close to that of the top quark, while other colored superpartners are much heavier than TeV. This sort of spectrum is harder to achieve from the model-building perspective, but is favorable from the point of view of naturalness: light stops would cancel the dominant contribution to the Higgs mass from the induced in the Standard Model by the top quark. If that sort of spectrum is realized in nature then the limits discussed in the previous paragraphs do not apply, mostly due to the fact that the stop pair production cross section at the LHC is much smaller than that of gluinos and 1st generation squarks. In that case more elaborate 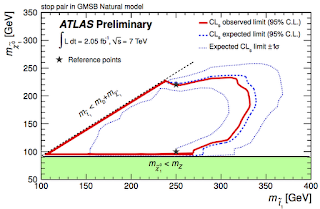 experimental strategies are in order. Last February ATLAS presented limits on stops produced in decays of gluinos but, again, these limits are void if gluinos are beyond the current LHC reach. Now ATLAS has released one search targeting the direct stop production, however in the context of a more contrived SUSY model where the lightest neutralino spits off a Z boson while decaying to a gravitino (the event selection requires 2 leptons with the invariant mass in the Z window). In that particular model the limits on the stop mass are about 300 GeV. But, more generally, there are no model independent limits yet: for all we officially know, stops could be as light as the top quark...
di 01.40