I'm going to digress for a moment from the discussion on electric motors to return to the question of the double-potential well, which has surfaced on a couple of discussion groups in the last month. A year ago I described the wave function for the two-electron well...not two wells with two electrons, but one well with two electrons. And then I generalized this to the case of two hydrogen atoms far apart, which is basically the equivalent problem to the double-potential well.

(EDIT: It turns out I'm going to make so many mistakes in what's I'm about to do, that I should probably delete the whole post and start again from scratch. And yet I'm not going to do that. I think it's more realistic to show how the thought process works including the false steps. If you want to skip ahead to the cleaned up version, just click on the next post.)

At that time, I described only the lowest-energy state, which happens to be the spin-singlet state. There are actually three more spin-triplet states that need to be considered. For the two-electron well, these states are significantly higher in energy, but for the case of two hydrogen atoms far apart (the double well) they are so close in energy as to be virtually degenerate. Last year when I sketched them I used a couple of different graphic styles, and this year I've come up with yet another way of drawing the pictures. I hope this one is self-explanatory: (EDIT: This picture is still correct!) 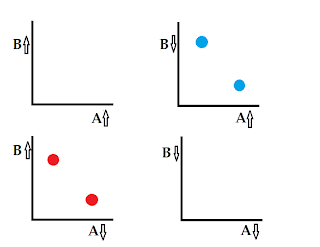 The graphs represent the spatial distribution of the wave function, with blue and red indicating positive and negative polarity. The total state is the sum of the four states shown. (Two of them are empty in this case.) Each little circle represents a "product state", where A is here and B is there. The ground state of two hydrogen atoms must therefore, according to my representation, be composed of the sum of four product states. You ought to verify that if you exchange A and B, you get back the same state except with a sign reversal. That's the overriding condition that must be fulfilled by any "legal" wave function.

There are three more states needed to complete the picture, and they are the triplet states. The first two are nice and easy. (EDIT: Here's where I start screwing up.) First, both electrons with spin up: 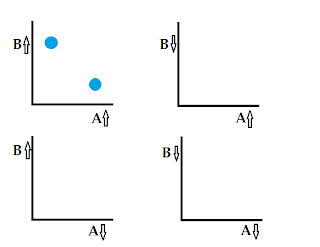 Then, both electrons with spin down: 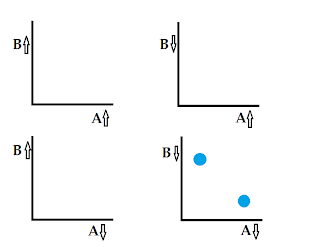 (EDIT: You can see these cases must be wrong because when you reverse A and B, you get back the same state. I'll fix it by reversing the polarity on one of the blue dots.)

And finally, the state that confuses people: the triplet state with spin zero. What makes this state physically different from the singlet state? It's a funny question. Here is what the state looks like: 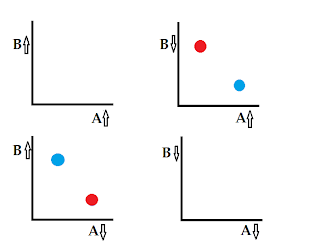 If I've drawn these right, and I think I have, (EDIT: I know I haven't! Still working on fixing them...) then anything that two hydrogen atoms can do has to be representable as the superposition of two or more of these systems. For example, if you want to say that this atom has spin up and the other one has spin down, you have to figure out how to generate that outcome as a superposition of these four basis states.

I don't have time to do that right now but I'll come back to it later.

15 MINUTES LATER: Okay, I said the triplet state was confusing, and it was. So confusing that I got it wrong too. Here is the REAL triplet state: 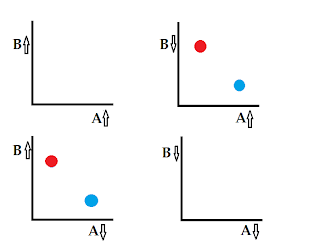