This morning I tried to write out the basis states for two hydrogen atoms far apart. I made some mistakes, which I've left behind for the world to see; but now I'm going to get it right. Here are the four basis states, where A and B are two electrons and the graphs represent their location in two-dimensional phase space. (I don't need to work in six-dimensional phase space because the location of the electrons is sufficiently well specified by saying it's either at this atom or that atom.) The overall state is the superposition of up to four substates defined in terms of all sixteen possible combinations (including polarity) of {A-up}*{B-down} etc. Here are the energy eigenstates: 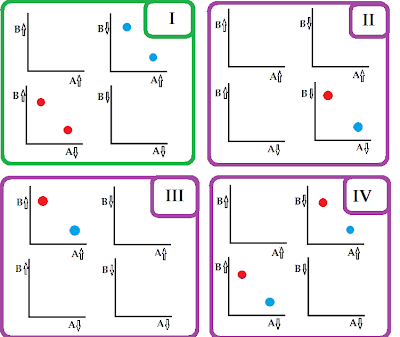 Essentially, each of the little colored circles in these diagrams represents a product state: so, for example, State III, with both electrons spin up, can be expanded in more conventional representation as  {B-up}*{A-up} - {A-up}*{B-up}, where the order of the product states is significant. It tells us which electron is at which atom. The singlet state I is the superposition of four product states: {A-up}*{B-dn} + {B-dn}*A{up} - {A-dn}*{B-up} - {B-up}*{A-dn}.   You can verify that for both these examples,  if you swap the letters A and B you get back the same state with a minus sign.

The energy eigenstates turn out to be completely specified by their spin state. Since there are two electrons, there are four spin states: the three triplet states (shown in purple) and the singlet state (shown in green). The parity of the spin state governs the parity of the spatial wave function. Since the overall parity must be odd, the odd parity (singlet state) must have even parity for the position state, and the even parity triplet states must have odd parity position states. You should be able to convince yourself that the parity of the position states is  found by checking for reflection about the y=x axes, with blue and red representing opposite polarites of the wave function.

If it is true that all these four states provide a true basis for all possible ground state configurations of two hydrogen atoms, then we are faced with some very clear restrictions. Primarily, since these are all states of definite parity, and odd parity at that, the parity of any composite states must preserve the odd parity of the basis states of which it is composed. The most immediate consequence is that we cannot say "electron A is at this atom with spin up, and electron B is at that atom with spin down." That would be represented by a single blue dot in the upper-right subquadrant of one of our charts, and that is clearly impossible to construct from the basis states.

On the other hand, we can readily arrange to have an electron at A with spin up, and one at B with spin down...as long as we are careful not to define which electron is where. We do this simply by adding together states I and IV. Red dots cancel blue dots and the result is: 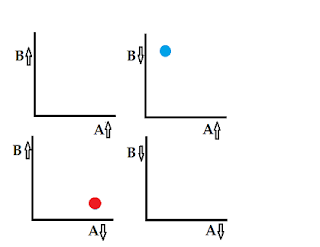 But there's a catch. Remember that state IV, the triplet state, has a slightly higher energy than state I, the singlet state. So the complex phases of those two states precess at slightly different rates. After a time, the two states initially in phase will be 180 degrees out of phase, and instead of adding the two basis states we will have to subtract them: 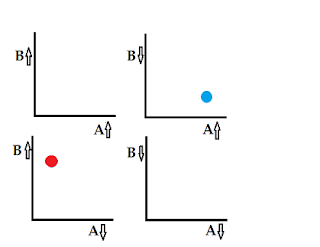 The spins have reversed themselves, and they will keep on reversing themselves as long as the system is in a superposition of the I and IV states.
I think that's enough for now. When we come back, I think I'm going to try to show how to get the spin to point sideways. Because we can't really believe that the spin direction on one atom somehow restricts the spin direction on the other atom. We have to be able to construct arbitrary combinations of spin using our limited set of four basis states. It should be interesting.
di 14.12