How I Got Maxwell-Boltzmann for Electron Spin

When we left off the other day I was telling you about some funny spreadsheet calculations. I had just figured out how to count electron spin states, after being stalled on the question for about three months. It turns out there's a kind of modified Pascal's Triangle that tells you how they add up. You know with coins, it's heads or tails, so if you want to know the chance of flipping four heads and two tails, you go to the sixth row of Pascal's Triangle:

and you can see that there are 15 ways out of 64 that you can flip 4H2T on six tosses. Another way of saying it is if you take six random steps alternately left and right, your chances are 15/64 of being one two steps to the right of your starting point. It's the one-dimensional Drunkard's Walk.

It's exactly the same with electrons. You have six electrons, and they each "have to" be either spin-up or spin-down. Since they each have spin-1/2, you should get a probability of 15/4 to find them with a total spin of +1.

But that's only part of the story. There are actually three different ways they can end up with z-axis spin of +1. They can have a total spin of 3, 2, or 1. We write these cases in the (l,m) representation as (3,1), (2,1) and (1,1). It turns out there is one way to get the first state, five ways to get the second state, and nine ways to get the third state. Fifteen pathways altogether.

And there's a modified Pascal's Triangle that gives you those parameters. It looks like this:

The terms of this triangle are actually the differences of the terms in Pascal's triangle, going halfway across each row. So if you add up successive terms, you recover Pascal's Triangle. You can see that the sixth row gives you:

So the z-axis spins are distributed according to Pascal's triangle, which is becomes a Gaussian for large numbers. But the y-axis spins must have the same distribution, as must the x-axis spins. But we already know (or should know) what you get when you have Gaussian distributions in three dimensions independently. It's the Maxwell-Boltzmann distribution, the distribution of gas molecule velocities in thermal equilibrium.

I should have seen this coming, but I actually didn't. I did some very intricate spreadsheet calculations with the modified Pascal's Triangle to see what the distribution looked like, and I was dismayed to find that it looked a lot like Maxwell-Boltzmann for quite a ways, but diverged markedly at the high end. This graph shows the ratio of the two curves: 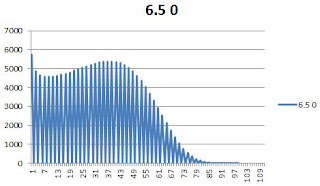 You can see I've added up 100 electrons to get a maximum total spin of +/-50. The RMS average spin is something like 5 in this case, so I get out there quite a few standard deviations before I start to diverge much from Maxwell-Boltzmann. This bothered me quite a lot.

But then I thought about it. I "knew" that Pascal's Triangle gave you a really good Gaussian, but had I ever plotted it to check out just how good? I threw it into the spreadsheet and what do you know? I got exactly the same curve. It was really close about halfway out and then fell off quite rapidly.

And it makes physical sense. The Binomial Distribution really is different from the Gaussian, especially near the ends. It's too much to expect them to line up all the way, and the extent to which they do track each other is really quite excellent. The graph here shows the ratio of the value of the two curves; if you consider that the Gaussian starts with a value of unity, by the time they start to diverge the Gaussian has a value of only 10^-8.

Anyhow, a couple of weeks ago I left off with the question of how you make an (l,m) state of (1/2,1/2) out of three electrons. Your available states are :