Robots will take your job 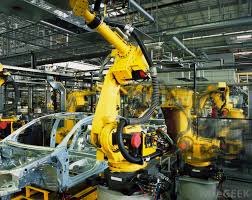 From MIT Tech Review, this article explores an important question: is technology putting people out of work? That simple answer is of course "yes," technology in manufacturing, for example, is clearly replacing human workers on a massive scale. It's true elsewhere too: many of the poorly written finance articles you see today are also written by machines. But technology also creates jobs, and the bigger question is whether it creates more than it destroys. The article looks at the work of MIT researchers Erik Brynjolfsson and Andrew MacAfee who argue based on productivity data that technology is now on balance eliminating jobs, and is in large part responsible for slow growth in employment:

Given his calm and reasoned academic demeanor, it is easy to miss just how provocative Erik Brynjolfsson’s contention really is. ­Brynjolfsson, a professor at the MIT Sloan School of Management, and his collaborator and coauthor Andrew McAfee have been arguing for the last year and a half that impressive advances in computer technology—from improved industrial robotics to automated translation services—are largely behind the sluggish employment growth of the last 10 to 15 years. Even more ominous for workers, the MIT academics foresee dismal prospects for many types of jobs as these powerful new technologies are increasingly adopted not only in manufacturing, clerical, and retail work but in professions such as law, financial services, education, and medicine.
That robots, automation, and software can replace people might seem obvious to anyone who’s worked in automotive manufacturing or as a travel agent. But Brynjolfsson and McAfee’s claim is more troubling and controversial. They believe that rapid technological change has been destroying jobs faster than it is creating them, contributing to the stagnation of median income and the growth of inequality in the United States. And, they suspect, something similar is happening in other technologically advanced countries.

Perhaps the most damning piece of evidence, according to Brynjolfsson, is a chart that only an economist could love. In economics, productivity—the amount of economic value created for a given unit of input, such as an hour of labor—is a crucial indicator of growth and wealth creation. It is a measure of progress. On the chart Brynjolfsson likes to show, separate lines represent productivity and total employment in the United States. For years after World War II, the two lines closely tracked each other, with increases in jobs corresponding to increases in productivity. The pattern is clear: as businesses generated more value from their workers, the country as a whole became richer, which fueled more economic activity and created even more jobs. Then, beginning in 2000, the lines diverge; productivity continues to rise robustly, but employment suddenly wilts. By 2011, a significant gap appears between the two lines, showing economic growth with no parallel increase in job creation. Brynjolfsson and McAfee call it the “great decoupling.” And Brynjolfsson says he is confident that technology is behind both the healthy growth in productivity and the weak growth in jobs.

It’s a startling assertion because it threatens the faith that many economists place in technological progress. Brynjolfsson and McAfee still believe that technology boosts productivity and makes societies wealthier, but they think that it can also have a dark side: technological progress is eliminating the need for many types of jobs and leaving the typical worker worse off than before. ­Brynjolfsson can point to a second chart indicating that median income is failing to rise even as the gross domestic product soars. “It’s the great paradox of our era,” he says. “Productivity is at record levels, innovation has never been faster, and yet at the same time, we have a falling median income and we have fewer jobs. People are falling behind because technology is advancing so fast and our skills and organizations aren’t keeping up.”

Brynjolfsson and McAfee are not Luddites. Indeed, they are sometimes accused of being too optimistic about the extent and speed of recent digital advances. Brynjolfsson says they began writing Race Against the Machine, the 2011 book in which they laid out much of their argument, because they wanted to explain the economic benefits of these new technologies (Brynjolfsson spent much of the 1990s sniffing out evidence that information technology was boosting rates of productivity). But it became clear to them that the same technologies making many jobs safer, easier, and more productive were also reducing the demand for many types of human workers.
....

“We were lucky and steadily rising productivity raised all boats for much of the 20th century,” he says. “Many people, especially economists, jumped to the conclusion that was just the way the world worked. I used to say that if we took care of productivity, everything else would take care of itself; it was the single most important economic statistic. But that’s no longer true.” He adds, “It’s one of the dirty secrets of economics: technology progress does grow the economy and create wealth, but there is no economic law that says everyone will benefit.” In other words, in the race against the machine, some are likely to win while many others lose.

The story is of course more complicated than this. Lots of technology will work along with people and make them more productive. Over time, people can also learn new skills and move into new jobs, so the long term trend isn't clear. But I do find it hard to believe in the simple "the economy will adjust as it always has" argument for the reasons that rates of change and time scales matter. Technological advance is accelerating. The more technology we have, the faster we learn to create  still more. The only way people will keep up is if technology deployed on a massive scale also helps them learn new skills in an ever faster way. Is that happening?