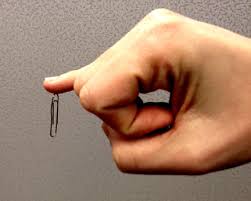 Maybe it's just a symptom of their being too many people in the world: if someone can think it, someone will do it. How else to explain the digital magnet?

New York City writer Dann Berg decided to get a magnet implant about three years ago after reading about the trend online. The article described an implant gone wrong complete with graphic images of a magnet decomposing under flesh. Initially put off by the gory details, he decided to go for it anyway...

"I had a curiosity to explore the world in a completely different way," he explained.

Gradually his finger began to develop a "sixth sense" around any object that gave off electromagnetic waves.

"There is a half dome of vibration that surrounds the object almost like a tennis ball cut in half," he said. "The vibrations vary in strength depending on where I hold my finger and it's almost like the finger itself is vibrating against an invisible field of energy."

Well now the poor sod has my sympathy. A finger that jiggles when in proximity to objects that gives off electromagnetic waves? My my my. That's got to be rough since EVERYTHING GIVES OFF ELECTROMAGNETIC WAVES. Everything with a temperature greater than absolute zero, that is. So... everything. There may be some ideomotor effect going on here, but I doubt anything real is going on.

Physics teachers who stick to mechanics all year (by choice) must shoulder some blame for this story being floated as plausible. Magnets remain objects of mystery and imagination to those who have absolutely no understanding of how they work. Let's cut that population down wherever we get the chance, lest there be a resurgence in the sales of magnetic bracelets.

Implanting a magnet is certainly up there with getting a tattoo in terms of unnecessary body mutilation. Experts will likely disagree on which one requires the lesser threshold of good judgment.

UPDATE: Interesting comments, including some rebuttal from Dann Berg. Without an implant, I cannot argue what an implantee feels or when s/he feels it. He mentions a strong sensation near an operating microwave. There is reason to believe such magnetic fields are strong. And that they oscillate, so as to produce a vibrational sensation.

But here's the thing.

If you want to experience such vibrations, you don't need a rare earth magnet. All you need is a ferromagnetic object. A steel washer would work just fine. Upside? Your finger won't stick to an iPad (or earbuds, I imagine). Downside? You can't dangle a paperclip from your pinky.

Here's a simple demonstration showing the magnetism generated by a microwave transformer.

The wrench and razor knife are steel. They are not magnets.
di 20.44