The Drama of Quantum Physics Takes to the Stage 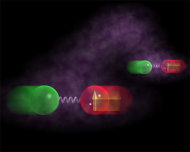 
In 1897, the physicist William Thomson, Lord Kelvin looked at all the tremendous advancements in electricity, astronomy and biology that marked his age and concluded: "There is nothing new to be discovered in physics now. All that remains is more and more precise measurement."

But that same year, physicist Ernest Rutherford discovered the electron — and physicists quickly realized their understanding of physics was far from complete. Electrons, mysteriously, behaved like both particles and waves. The electron's discovery kicked off a new age of scientific research — but it also deeply impacted the individuals who devoted their lives to finding some kind of logic to the electron's baffling wave-particle behavior.

This weekend at the World Science Festival, these scientists' research, theories and passion was played out on-stage. Theoretical physicist Brian Greene presented and narrated "Spooky Action: The Drama of Quantum Physics," an event combining elements of a college-level physics lecture, history lesson, and theatrical performance. [Wacky Physics: The Coolest Little Particles in Nature]

Greene's narrative, though technical, focused not on the particles and theories that comprised the debate on the nature of the electron, but the debaters themselves, brought to life by actors Maia Guest, Michael Roush and Carl Howell, who crossed the stage behind Greene to deliver lines taken directly from historical records.

At the center of the drama was the rivalry and grudging friendship between Albert Einstein and Niels Bohr, two brilliant physicists who fell on opposite sides of the new debate that came to be known asquantum theory.

The debate began when Bohr proposed a theory for the electron's behavior: that perhaps what looked like a wave to the scientists' eyes was actually a spectrum of possibility. Perhaps electrons do not have a fixed location, only a likelihood of being in one place or another.

This idea threw the stable scientific community of Lord Kelvin's day into an uproar. As Greene explained from the stage, "Quantum mechanics described a very unfamiliar reality, a reality in which particles could be here or there or in other places. A reality that embraces a whole host of distinct and mutually exclusive possibilities ... Before this, physics, the world, reality, was defined by objects parked at definite locations. What could be more basic than that? Yet now the vanguard of quantum physicists was saying that idea was dead wrong."

"Physicists were reduced to calculating the chance of getting one outcome or another," Greene explained. And some physicists didn't like that one bit.

Among the dissenters was Einstein (played by Guest), who declared onstage, "In any case I am convinced that He does not throw dice."

Einstein rejected the notion that the fabric of the universe was based, at the molecular level, on probability. He argued that quantum theory was still incomplete, that physics simply didn't yet have the tools to create an accurate model of nature.

To illustrate this, Einstein called attention to a quantum phenomenon that had previously been overlooked: the ability of certain electrons to seemingly communicate with each other across vast distances. This phenomenon came to be known as "entanglement."

Once two particles become "entangled," Greene explained, they can no longer be described solely by their own characteristics, even when they are separated once again. So when you observe one of a pair of entangled particles, you'll know the characteristics of the other, even if they lie far apart. This principle could be the key to achieving rapid long-distance communication and even, one day, teleportation, some scientists say.

Einstein argued that entanglement was proof that there must be some type of information, called "local realism," inherent in these particles that quantum mechanics just couldn't detect yet. The only other solution was that the "entangled" particles were communicating with each other — a notion that Einstein famously called "spooky action at a distance," from which Greene's performance takes its name.

Further, later experiments by physicist John Stewart Bell seemed to suggest that Einstein's idea of "local realism" was flawed, and incompatible with quantum theory at large. To this day, quantum entanglement is still not fully understood.

But, as Einstein would argue, the idea that observation was necessary to create reality doesn't make sense when played out to its logical conclusion. The classic example is Schrödinger's famous cat experiment: Imagine there was a cat locked in a box that had a capsule of poison gas attached to it. If a given particle were in one state, the poison gas would be released into the box, killing the cat. If the particle was in a different state, however, the gas would not be released and the cat would live. According to Bohr, before you open the box to check on the cat, the cat would be both alive and dead, reflecting the multiple possible states of the particle. But that just doesn't make sense — the cat has to be either dead or alive. So why shouldn't the particle be the same?

Where does this leave us, then, if we have both infinite probability and the need for one real outcome? "Spooky Action: The Drama of Quantum Physics" ended with one last physicist, a 1957 Princeton graduate student named Hugh Everett, who proposed a way for particles to be in many places at once: multiple realities.

Email jscharr@technewsdaily.com or follow her @JillScharr. Follow us @livescience, Facebook &Google+. Original article on LiveScience.com.
The 9 Biggest Unsolved Mysteries in Physics
Gallery: Dreamy Images Reveal Beauty in Physics
10 Technologies Poised to Transform our WorldCopyright 2013 LiveScience, a TechMediaNetwork company. All rights reserved. This material may not be published, broadcast, rewritten or redistributed.