The War on Reality 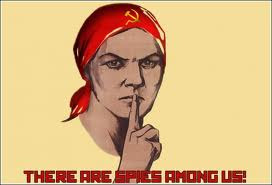 If you're at all disturbed (I am) by the various recent revelations over massive data trolling by government agencies, you should read this article in the NYT by Peter Ludlow. It looks at the vast and largely invisible ecology of private security and intelligence firms that are not only gathering information on ordinary people, but actively creating and spreading disinformation (otherwise known as "lies") to discredit opponents of their corporate clients. They're information mercenaries who are essentially shaping reality as we see it -- and not with benign motives, you can be sure. Ludlow:

To get some perspective on the manipulative role that private intelligence agencies play in our society, it is worth examining information that has been revealed by some significant hacks in the past few years of previously secret data.

Important insight into the world these companies came from a 2010 hack by a group best known as LulzSec  (at the time the group was called Internet Feds), which targeted the private intelligence firm HBGary Federal.  That hack yielded 75,000 e-mails.  It revealed, for example, that Bank of America approached the Department of Justice over concerns about information that WikiLeaks had about it.  The Department of Justice in turn referred Bank of America to the lobbying firm Hunton and Willliams, which in turn connected the bank with a group of information security firms collectively known as Team Themis.

Team Themis (a group that included HBGary and the private intelligence and security firms Palantir Technologies, Berico Technologies and Endgame Systems) was effectively brought in to find a way to undermine the credibility of WikiLeaks and the journalist Glenn Greenwald (who recently broke the story of Edward Snowden’s leak of the N.S.A.’s Prism program),  because of Greenwald’s support for WikiLeaks. Specifically, the plan called for actions to “sabotage or discredit the opposing organization” including a plan to submit fake documents and then call out the error. As for Greenwald, it was argued that he would cave “if pushed” because he would “choose professional preservation over cause.” That evidently wasn’t the case.

Team Themis also developed a proposal for the Chamber of Commerce to undermine the credibility of one of its critics, a group called Chamber Watch. The proposal called for first creating a “false document, perhaps highlighting periodical financial information,” giving it to a progressive group opposing the Chamber, and then subsequently exposing the document as a fake to “prove that U.S. Chamber Watch cannot be trusted with information and/or tell the truth.” (A photocopy of the proposal can be found here.)

In addition, the group proposed creating a “fake insider persona” to infiltrate Chamber Watch.  They would “create two fake insider personas, using one as leverage to discredit the other while confirming the legitimacy of the second.” The hack also revealed evidence that Team Themis was developing a “persona management” system — a program, developed at the specific request of the United States Air Force, that allowed one user to control multiple online identities (“sock puppets”) for commenting in social media spaces, thus giving the appearance of grass roots support.  The contract was eventually awarded to another private intelligence firm.

This may sound like nothing so much as a “Matrix”-like fantasy, but it is distinctly real, and resembles in some ways the employment of “Psyops” (psychological operations), which as most students of recent American history know, have been part of the nation’s military strategy for decades. The military’s “Unconventional Warfare Training Manual” defines Psyops as “planned operations to convey selected information and indicators to foreign audiences to influence their emotions, motives, objective reasoning, and ultimately the behavior of foreign governments, organizations, groups, and individuals.” In other words, it is sometimes more effective to deceive a population into a false reality than it is to impose its will with force or conventional weapons.  Of course this could also apply to one’s own population if you chose to view it as an “enemy” whose “motives, reasoning, and behavior” needed to be controlled.

Psyops need not be conducted by nation states; they can be undertaken by anyone with the capabilities and the incentive to conduct them, and in the case of private intelligence contractors, there are both incentives (billions of dollars in contracts) and capabilities.

Several months after the hack of HBGary, a Chicago area activist and hacker named Jeremy Hammond successfully hacked into another private intelligence firm — Strategic Forcasting Inc., or Stratfor), and released approximately five million e-mails. This hack provided a remarkable insight into how the private security and intelligence companies view themselves vis a vis government security agencies like the C.I.A. In a 2004 e-mail to Stratfor employees, the firm’s founder and chairman George Friedman was downright dismissive of the C.I.A.’s capabilities relative to their own:  “Everyone in Langley [the C.I.A.] knows that we do things they have never been able to do with a small fraction of their resources. They have always asked how we did it. We can now show them and maybe they can learn.”

The Stratfor e-mails provided us just one more narrow glimpse into the world of the private security firms, but the view was frightening.  The leaked e-mails revealed surveillance activities to monitor protestors in Occupy Austin as well as Occupy’s relation to the environmental group Deep Green Resistance.  Staffers discussed how one of their own men went undercover (“U/C”) and inquired about an Occupy Austin General Assembly meeting to gain insight into how the group operates.\

Stratfor was also involved in monitoring activists who were seeking reparations for victims of a chemical plant disaster in Bhopal, India, including a group called Bophal Medical Appeal. But the targets also included The Yes Men, a satirical group that had humiliated Dow Chemical with a fake news conference announcing reparations for the victims.  Stratfor regularly copied several Dow officers on the minutia of activities by the two members of the Yes Men.One intriguing e-mail revealed that the Coca-Cola company was asking Stratfor for intelligence on PETA (People for the Ethical Treatment of Animals) with Stratfor vice president for Intelligence claiming that “The F.B.I. has a classified investigation on PETA operatives. I’ll see what I can uncover.” From this one could get the impression that the F.B.I. was in effect working as a private detective Stratfor and its corporate clients.

Stratfor also had a broad-ranging public relations campaign.  The e-mails revealed numerous media companies on its payroll. While one motivation for the partnerships was presumably to have sources of intelligence, Stratfor worked hard to have soap boxes from which to project its interests. In one 2007 e-mail, it seemed that Stratfor was close to securing a regular show on NPR: “[the producer] agreed that she wants to not just get George or Stratfor on one time on NPR but help us figure the right way to have a relationship between ‘Morning Edition’ and Stratfor.”

On May 28 Jeremy Hammond pled guilty to the Stratfor hack, noting that even if he could successfully defend himself against the charges he was facing, the Department of Justice promised him that he would face the same charges in eight different districts and he would be shipped to all of them in turn.  He would become a defendant for life.  He had no choice but to plea to a deal in which he may be sentenced to 10 years in prison.  But even as he made the plea he issued a statement, saying “I did this because I believe people have a right to know what governments and corporations are doing behind closed doors. I did what I believe is right.”  (In a video interview conducted by Glenn Greenwald with Edward Snowden in Hong Kong this week, Snowden expressed a similar ethical stance regarding his actions.)

Given the scope and content of what Hammond’s hacks exposed, his supporters agree that what he did was right. In their view, the private intelligence industry is effectively engaged in Psyops against the American public., engaging in “planned operations to convey selected information to [us] to influence [our] emotions, motives, objective reasoning and, ultimately, [our] behavior”? Or as the philosopher might put it, they are engaged in epistemic warfare.