The other day I showed you what a moving train looks like in relativity. Here is the graph I drew comparing the world-lines of a moving train and a stationary train: 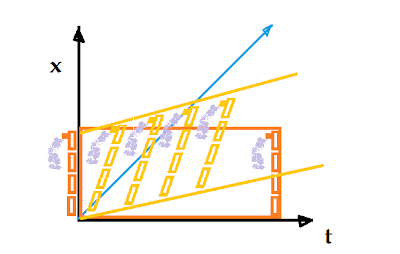 It's important to note, among other things, that the lines for the front of the train do not intersect on the x-axis. I talked about this the other day. Today I'm going to try and explain why it has to work that way. 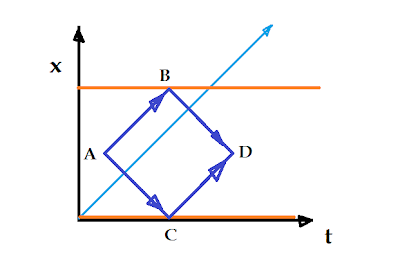 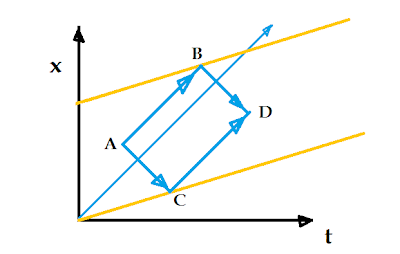 For the stationary observer, events A and D occur at the same place, because the train is stationary; and the moving observer, who can't see outside the train, is entitled to make the same presumption about his points A and D. There is nothing strange about this; it's just what we call "Gallilean Relativity". We talked about how in the moving observer's coordinate system, the time axis is tilted up so it's parallel to AD.

Relativity comes into the picture when we look at simultaneity. Obviously for the stationary observer events B and C are simultaneous; relativity tells us that the moving observer also sees them as being simultaneous. And just the same way his time-axis tilted upwards so it became parallel to AD, so must his x-axis tilt sideways so it is parallel to CD. Simple geometry shows us that the two axes tilt by the same angle. (As always, we are using a system of units where c=1.)

But there's more. In the new coordinate system, time and distance are stretched. I'm not going to tell you why they get stretched today, but I'll tell you how they stretch. It's based on the relativistic Law of Pythagoras. You might think that the relativistic separation, or "distance" between two points on the x-t axis would just be given by the familiar equation:

But it doesn't work that way in relativity. Believe it or not, the relativistic separation between two points is calculated like so:

In the Relativistic Law of Pythagoras, instead of circles we get hyperbolas. (Because of the minus sign). So points along a hyperbola are the same relativistic separation from the origin. If that separation is along a line below the line x=t, then the separation is time-like; and so the intersection of the trains world-line with those hyperbolas marks off the time in seconds. It's hard to draw a good hyperbola in Paintbrush but it looks something like this: 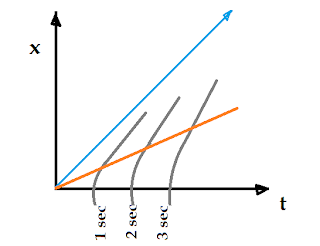 For the observer in the moving train, those hyperbolas mark of the time in seconds: 1,2,3....  In this picture the man in the train has counted off three seconds while an observer standing beside the track has counted off something like four. Time is all screwed up in relativity.