A kingdom for a scale

The recent hiatus, so far the longest in the history of Résonaances, was caused by a unique combination of work, travel, frustration, depression, and sloth. Sorry :-|  A day may come when this blog will fall silent forever; but it is not this day ;)

After the first run of the LHC particle physics finds itself in an unprecedented situation. During most of  the history of the discipline we had a high energy scale that allowed us to organize our theoretical and experimental efforts. It first appeared back in the 1930s when Fermi wrote down his theory of weak interactions which contained a 4-fermion operator mediating the beta decay of the neutron. For dimensional reasons, 4-fermion operators appear in the Lagrangian divided by an energy scale squared, and in the case of the Fermi operator  this scale is what we now know as the electroweak scale v=174 GeV. This scale come with well defined physical consequences. Scattering amplitudes in the Fermi theory misbehave at energies above v, and some new physics must appear to regulate them. Later several details of this picture were modified. In particular, it was found that the Fermi  4-fermion operator is a low energy effective description of the exchange of a W boson between pairs of fermions. However the argument for new physics near the electroweak scale remained in place, this time to regulate the W and Z bosons scattering amplitudes. That's why even before the LHC kicked off  we could give an almost risk-free promise that it was going to discover something.

Now things have changed dramatically. The LHC has explored the energy range up to about 1 TeV and definitively crossed the electroweak scale. The promised new physics phenomenon was found: a spin-0 boson coupled to mass,  as predicted in the Standard Model. This little addition miraculously cures all the woes of the theory. Ignoring gravity, the Standard Model with the 125 GeV Higgs boson can be extended to arbitrarily high scales. Only the coupling of matter to gravity guarantees some new phenomena, like maybe strong gravitational effects and production of black holes. But that should happen at an immensely high scale of 10^19 GeV that we may never be able to reach in collider experiments. We are not sure if  there is any other physical scale between the electroweak and Planck scale. There's no well defined energy frontier we can head toward. Particle physics no longer has  a firm reference point. An artist's view of the current situation is this: 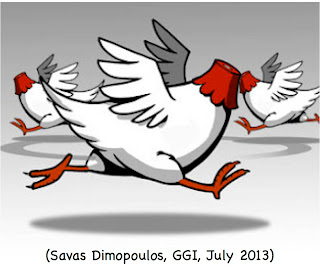 There's actually one important practical consequence.  Regardless how high energy collider we build next: 30 TeV, 100 TeV, or 1000 TeV,  we cannot be sure it will discover any new phenomena rather than just confirm the old theory in the new energy range.

This is not to say that the Standard Model must be valid all the way to the Planck scale. On the contrary we have strong hints it is otherwise. The existence of dark matter, the observations of  neutrino oscillations, the matter-antimatter asymmetry in the Universe, and the cosmological inflation, they all require some physics beyond the Standard Model. However none of the above points to a concrete scale where new phenomena must show up. The answers may be just behind the corner  and be revealed by the run-II of the LHC. Or the answer may be due to Planck-scale physics and will never be directly explored; or else it may be due to very light and very weakly coupled degrees of freedom that should be probed by other means than colliders. For example, for dark matter particles we know theoretically motivated models with the mass ranging from sub-eV (axions) to the GUT scale (wimpzillas), and there is no mass  between these two extremes that is clearly favored from the theory point of view.  The case of the neutrino oscillations is a bit different because, as soon as we prove experimentally that neutrinos are Majorana particles, we will confirm  the existence of a set of dimension-5  operators beyond the Standard Model, the so-called Weinberg operators of the form (H L)^2/Λ. Then the scale Λ is the maximum energy scale where new physics (singlet Majorana neutrinos or something more complicated) has to show up. This is however little consolation given the scale emerging from neutrino experiments is Λ∼10^15 GeV, obviously beyond the direct reach of accelerators in a foreseeable future.

So, while pushing up the energy frontier in accelerators will continue, I think that currently searching high and low for a new scale is the top priority. Indeed, increasing the collision energy has become an expensive and time consuming endeavor; we will achieve an almost factor of 2 increase in 2 years, and, optimistically, we can hope for another factor of 2 at the time scale of ∼25 years. On the other hand, indirect sensitivity to high scales via searches for  higher dimensional operators beyond the standard model can often be improved by orders of magnitude in the near future. The hope is that Fermi's trick will work again and we may discover the new scale indirectly, by means of experiments at much lower energies. There are literally hundreds of dimension-6 operators beyond the standard model that can be searched for in experiments. For example, operators involving the Higgs fields would affect the Higgs couplings measured, and in this case the LHC and later the ILC can probe the operators suppressed by up to ∼10 TeV. Flavor and CP violating processes offer an even more sensitive probe, with the typical sensitivity between 10 and 10^5 TeV. Who knows, maybe the recent anomaly in B→K*μμ decays is not yet another false alarm, but an effect of the flavor violating dimension-6 operators of the form

with Λ of order 30 TeV.  And if not,  there are hundreds other doors to knock on.  Demonstrating the presence of a nearby new physics scale would surely bring back momentum to the particle physics program. At least, we would know where we stand, and how big a collider we must build to be guaranteed new physics.  So yes, a kingdom and on my part I'm adding the hand of a princess too..
di 07.48