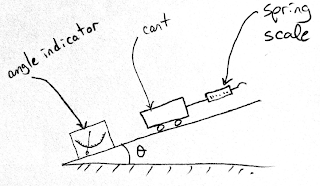 In my advanced / AP classes, the first week consists of demonstrations involving static equilibrium.  The homework includes equilibrium problems to solve.  After a week of demonstrations, problems, and quizzes, we do our first laboratory exercise.
I start by explaining* the general point of experimental physics -- we've solved lots of problems using the principles of equilibrium.  Now it's time to put these principles to a rigorous test, to provide experimental evidence that our problem solving methods are legitimate.  I do no further discussion of theory until we've collected loads of data.
* VERY BRIEFLY.  Students don't want to hear a lecture about the philosophy of experimental vs. theoretical science.  They will tune out instantly if I talk about this for more than about one minute; I want my class time spent collecting data, not listening to me drone on.
Next, I show the experiment:  At the front of the room, I stick a cart on an angled track.  I hold a string with attached spring scale parallel to the track, and read the scale; I put an angle indicator* on the ramp and read the angle.  I make a table on the board with a column for the tension in the string, and the angle of the incline.  I sketch a graph on the board next to the table, with axes labeled "Tension in the string (N)" and "Angle of the incline above the horizontal (degrees)".  I place a dot on the graph.  Then I make one more measurement... and we're just about ready to go.
* If you don't have the $20 PASCO angle indicator -- and you probably shouldn't -- use the "Clinometer" or "iHandy Level" app on the iPhone.  Android has similar and free apps.
The last thing I do before breaking everyone into groups is to briefly discuss the rules of laboratory, including that all data goes directly on the graph, and that you may not measure the same data point twice.  (Many students will nevertheless ignore these rules.  Don't get frustrated, just expect it and deal with it.  Even in my AP Summer institute, several teachers made a table of data without a graph, despite the fact that I said two or three times, very loudly, "You may NOT just make a data table now and graph later!")
Finally, I choose partners randomly with random.org, and we go at it.
"Go at what," you ask.  Where's lab sheet?
There is no "lab sheet."  The students have to listen and watch, then do the experiment.  If they didn't figure out what to do by watching, a lab sheet won't help.
So how do you set up all the stations before lab?
I don't.  I show everyone where the equipment is kept.  That's it.  They have to tie string themselves.  They have to find their own space to use, even if that space is in the hallway.  And, they have to clean up themselves.  This approach saves me time, sure; but it's also more authentic experimental physics.  Setting up themselves, with no lab sheet, makes the experiment less an exercise in following directions than in collecting data in which they have a personal connection.
How many data points do they collect?
They're not allowed to ask that silly question.  They keep collecting data until a first grader could clearly differentiate between the data points making a line or a curve.  When they think they have enough data, groups show me the graph, and I take a look.  More often than not on the first day I say, "what, you think five points provides a clear pattern?  Pah, back to the experiment before I send thee to the dungeons."  Then comes "Oh, this data is looking good, and does in fact look linear.  But the angles only go up to about 40 degrees.  Let's explore all the available angles... why not go up as steep as possible?  Then we'll be sure that the line continues."
Finally, groups will produce a graph that flattens out at larger angles.  At this point -- and NOT before -- do I show the free-body diagram and equations relating the tension in the string to the angle: T = mgsinθ.  No wonder the graph flattens... that's what a sine graph does for angles from 0-90 degrees!  This is a pretty awesome "ah-a!" moment for many students, one that wouldn't have happened if I had shown them the equation or analysis before we started.
All this data collection generally takes most of a 90 minute period.  Those who finish put away their equipment and begin the analysis, in which they make a new graph of tension vs. the sine of the angle... then they use the linear graph's slope to determine the cart's mass.
I can discuss the analysis in a future post.  That's really of secondary consideration for now.  I'd like more physics teachers to separate data collection from data analysis.  I see so many students try to answer AP lab questions with equations and calculations... let's make sure that students can collect data, graph that data appropriately, and describe the appropriate use of equipment.  Then we can worry about linearizing graphs and taking slopes.
di 07.31