On the latest anomaly in LHCb

[...So, Resonaances is back with its trademark pessimism and frustration. But here is a post with a glimmer of hope and a bit more substance...]

LHCb recently reported an anomaly in the angular distribution of  B0 → K*0 (→K+π-) μ+ μ- decays. The discreet charm of flavor physics is that even trying to understand which process is being studied may  give you a serious migraine. So let's first translate to English.  B0 is a pseudoscalar meson made of an anti-b- and a d-quark that is easily found in the junk produced by LHC collisions. K*0, actually K*0(892) because they come in variety of masses,  is a vector meson made of an anti-s and a d-quark which promptly decays to a usual charged kaon and a pion.  B0 → K*0(→K+π-) μ+ μ-, in the following simply referred to as B → K*μμ, is a rare decay  occurring with the branching fraction of order 10^-7.

Of course there's also the conjugate process where each particle is replaced with its anti-particle, and the two are dumped together in the LHCb analysis.  Some properties of this decay have been studied before at the B-factories, Tevatron, and LHC, without finding anything unexpected. The new thing about the latest LHCb analysis is that they study the full monty differential distribution with respect to the 4 variables characterizing this four-body decay process: 3 angles θK,θl and φ (see the picture) and the invariant mass q^2 of the di-muon pair.  A parametrization of that differential distribution is

Basically, LHCb measured all these Sn and FL coefficients as a function of q^2.  The largest anomaly is observed at low q^2 in the parameter S5 (also presented as  P5' which is S5 rescaled a function of FL).  LHCb quantifies it is a 3.7 sigma deviation from the Standard Model in the region 4.3≤q^2≤8.68 GeV^2;  this is downgraded to 2.5 sigma if the look-elsewhere effect is taken into account.  Theorists fitting the data quote the deviation between 1 and  4.5 sigma, depending on theoretical assumptions and how the data are sliced and cooked. 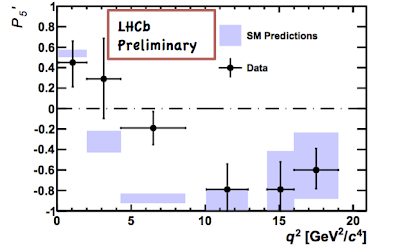 The interesting question is whether new physics could be responsible for the anomaly. To go beyond a yes/no answer one has to, unfortunately, go through a bit of technicalities.  At the parton level, the relevant process is the b→sμ+μ- decay.  Theorists computing the  B → K*μμ decay thus start from an effective interaction Lagrangian with  4-fermion and dipole operators involving  the b- and s-quarks. The operators relevant for this process are

where Λref≈35 TeV. This set of operators allows one to describe the B → K*μμ  decays in a completely model independent way, whether within the Standard Model or in some new physics scenario. In the Standard Model a subset of these operators is generated (see the diagrams) with the coefficients C7, C9 and C10 of order 1 (the suppression scale of the effective operators is tens of TeV due to the loop suppression, and also due to the CKM suppression via the small Vbs matrix element; this is why B → K*μμ is so sensitive to new physics).

New physics could provide additional contributions to these 3 operators or produce the C' operators that are not generated in the Standard Model at all. For example, the tree-level exchange of a Z' boson coupled to leptons and, in a flavor violating way, to quarks could affect C9 and C9'; the dipole operators C7 and C7' could be generated e.g. by loop diagrams with  a charged Higgs boson, and so on. Now, all of these operators affect the angular distribution of B → K*μμ decays, in particular they can shift the anomalous observable S5/P5'. But one should be careful not to screw up the other observables that remain in a good agreement with the Standard Model. Moreover, the same operators also affect  countless other processes in the B-meson sector, including the well measured branching fractions for  B → Xs γ  and  Bs→μμ decays.  Thus, it is a non-trivial question whether a consistent solution to the anomaly can be found.  The answer is that that, indeed, there do exist regions in the parameter space where the fit to the data is much better than in the Standard Model. According to this paper, the best scenario is the one where new physics generates simultaneously C9 and C9', with the contribution to C9 similar in size but opposite in sign to the Standard Model effective contribution. Other combinations of the operators can also improve the fit,  but the gain is less striking. 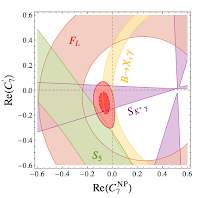 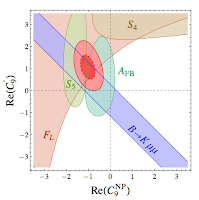 So, the verdict is... well, at this point the anomaly is not utterly solid yet.  One warning flag is that it shows up in a complicated angular analysis rather than in a clean and simple observable, which gives  more opportunities for theories and experimenters alike to commit a subtle error in the analysis. Moreover, in order to explain the anomaly, new physics contributions to the B → K*μμ amplitude need to be of the same order of magnitude as the Standard Models ones, which requires a certain degree of conspiracy. Most likely, the experimental data and the Standard Model predictions will approach each other when more data is analyzed,  as it has happened countless times in the past.   Nevertheless, we're looking forward to the future updates on B → K*μμ with a little more anticipation than usual. Note that the current LHCb analysis includes only the 7 TeV run data;  the twice as large 8 TeV sample is still waiting to see the light...

[Most pictures stolen from Nicola Serra's talk at EPS]
di 08.57