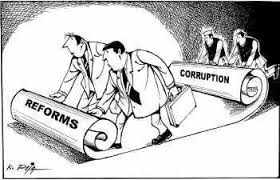 Several years ago, immediately post-crisis, I wrote a short article for Nature exploring new ideas about modelling economic and financial systems. I wrote about agent-based models and other similar ideas, nothing all that earth shaking really. In an early draft, I recall adding a section toward the end of the piece making the point that, of course, better models, better science, etc., would never be enough because ultimately policy making has an irreducible political element; financial crises can almost always be traced back to the political influence of powerful forces who shape policies to help themselves (or to try to do so), with little thought for the welfare of others. To my surprise, my editor at Nature took that section out saying something like "we'd like to stick to the science."

I thought that was unfortunate and hugely misleading. Corruption is real, and I really do think that no amount of better economics will eliminate financial and economic crises, because of the reality of politics. No avoiding it. Simon Wren-Lewis has a great post on this topic today, looking at why it would not actually be that hard -- conceptually -- to make the financial system more stable. The only barrier is the intimate connection between finance and politics ("quite frankly, the banks own this place" as U.S. Senator Dick Durbin once put it), which means that banks won't actually have to do things that might help the public good and the nation as a whole:

There is one simple and straightforward measure that would go a long way to avoiding another global financial crisis, and that is to substantially increase the proportion of bank equity that banks are obliged to hold. This point is put forcibly, and in plain language, in a recent book by Admati and Hellwig: The Bankers New Clothes. (Here is a short NYT piece by Admati.) Admati and Hellwig suggest the proportion of the balance sheet that is backed by equity should be something like 25%, and other estimates for the optimal amount of bank equity come up with similar numbers. The numbers that regulators are intending to impose post-crisis are tiny in comparison.
It is worth quoting the first paragraph of a FT review by Martin Wolf of their book:

“The UK’s Independent Commission on Banking, of which I was a member, made a modest proposal: the proportion of the balance sheet of UK retail banks that has to be funded by equity, instead of debt, should be raised to 4 per cent. This would be just a percentage point above the figure suggested by the Basel Committee on Banking Supervision. The government rejected this, because of lobbying by the banks.”

Why are banks so reluctant to raise more equity capital? One reason is tax breaks that make finance using borrowing cheaper. But non-financial companies, that also have a choice between raising equity and borrowing to finance investment, typically use much more equity capital and less borrowing. If things go wrong, you can reduce dividends, but you still have to pay interest, so companies limit the amount of borrowing they do to reduce the risk of bankruptcy. But large banks are famously too big to fail. So someone else takes care of the bankruptcy risk - you and me. We effectively guarantee the borrowing that banks do. (If this is not clear, read chapter 9 of the book here.  The authors make a nice analogy with a rich aunt who offers to always guarantee your mortgage.)
The state guarantee is a huge, and ongoing, public subsidy to the banking sector. For large banks, it is of the same order of magnitude as the profits they make. We know where a large proportion of the profits go - into bonuses for those who work in those banks. The larger is the amount of equity capital that banks are forced to hold, the more the holders of that equity bear the cost of bank failure, and the less is the public subsidy. Seen in this way it becomes obvious why banks do not want to hold more equity capital - they rather like being subsidised by the state, so that the state can contribute to their bonuses. (Existing equity holders will also resist increasing equity capital, for reasons Carola Binder summarises based on the work of Admati and Hellwig and coauthors.)
This is why the argument is largely a no brainer for economists. [1] Most economists are instinctively against state subsidies, unless there are obvious externalities which they are countering. With banks the subsidy is not just an unwarranted transfer of resources, but it is also distorting the incentives for bankers to take risk, as we found out in 2007/8. Bankers make money when the risk pays off, and get bailed out by governments when it does not.
So why are economists being ignored by politicians? It is hardly because banks are popular with the public. The scale of the banking sector’s misdemeanours is incredible, as John Lanchester sets out here. I suspect many will think that banks are being treated lightly because politicians are concerned about choking off the recovery. Yet the argument that banks often make - holding equity capital represents money that is ‘tied up’ and so cannot be lent to firms and consumers - is simply nonsense. A more respectable argument is that holding much more equity capital would translate into greater costs for bank borrowers, but David Miles suggests the size of this effect would not be large. (See also Simon Johnson here, John Plender here and Thomas Hoenig here.) In any case, public subsidies are bound to be passed on to some extent, but that does not justify them. Politicians are busy trying to phase out public subsidies elsewhere, so why are banks so different?
There is one simple explanation. The power of the banking lobby (and the financial industry more generally) is immense, from campaign contributions to regulatory capture of various kinds. It would be nice to imagine that the UK was less vulnerable than the US in this respect, but there are good reasons to think otherwise. [2] As a result, the power and influence of banks and bankers within government has hardly suffered as a result of the Great Recession that they played a large part in creating.

This point bears repeating -- indeed, it ought to be repeated every day for the rest of the year. All the technical and semi-technical articles now being published about measures for getting at systemic risk and improved schemes for weighting capital and so on, however clever and interesting they may be, actually only serve to draw attention away from this most serious problem, which is institutionalized corruption plain and simple. If every finance professor wrote one article on this topic -- after all, shouldn't this really be THE main topic in finance today? -- we might one day get somewhere with fixing the financial system.
di 05.01