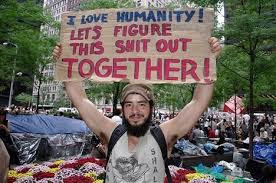 I'm getting back tomorrow from extended travels in Poland and the UK and hope to resume some more frequent blogging. Just a quick note today to clarify my recent column in Bloomberg on Homo economicus and the payoffs to friendly types in Prisoner's Dilemma games. Several people commenting on Bloomberg have suggested that what I've said was known 20 years ago or was all evident from the famous work of Robert Axelrod on the iterated Prisoner's Dilemma. They don't seem to have taken a look at the specific paper I referred to in the piece, which is very recent, but maybe that's my fault as I didn't spell out what is new about this work as well as I could have.

This study by Thomas Grund and colleagues does not JUST look at the iterated Prisoner's Dilemma or point out that mechanisms of group selection can support the evolution of altruists. This is indeed already known and has been known for a while. However, these mechanisms are also subject to limitations depending on various factors such as group mixing. The current study looks at a situation in which individuals CAN care about the payoffs for others with whom they interact (their utility function has an other-regarding component). It assumes that this does NOTHING for their reproductive fitness, however, this being totally distinct from utility and depending on an individual's own payoff. In other words, the model assumes that helping behavior is costly.

So, why would someone come to care for about the payoffs to others? Why indeed. This is where the story gets interesting. Just let this be possible by giving everyone a "friendliness" parameter F reflecting how much they care about others (0 = no caring, 1 = a lot of caring). What the study shows is that, even if everyone starts out with F = 0, this situation is unstable to the evolution of caring behavior. If individuals pass on their friendliness (genetically or culturally) to offspring, then random variations in friendliness values, caught on the wing by selection, can spread through the population. In effect, friendliness, even though it matters not for actually fitness, can provide an organizational scaffolding that makes it easier for cooperators to find cooperators. The mere possibility of friendliness (you can call this arbitrary variable anything you like) allows a spatial segregation of the population that enables much higher levels of cooperation.

This is, I think, quite new and very different from earlier studies. It introduces an essentially new element. Homo economicus, in this world, suffers because he is not capable of responding as flexibly as are others in the population (i.e. making decisions on the basis of matters that have no link whatsoever to his fitness). Those who are more flexible -- and apparently unreasonable -- can come to dominate quite quickly in the right circumstances. From the paper:

However, why does this transition happen in just a few generations (see Fig. 1B), i.e. much faster than expected? This relates to our distinction of preferences and behaviour. When an ‘idealist’ is born in a neighbourhood with friendliness levels supporting conditional cooperation, this can trigger off a cascade of changes from defective to cooperative behaviour. Under such conditions, a single ‘idealist’ may quickly turn a defective neighbourhood into a largely cooperative one. This implies higher payoffs and higher reproduction rates for both, idealists and conditional co-operators.

The intriguing phase transition from self-regarding to other-regarding preferences critically depends on the local reproduction rate (see Fig. 2). The clustering of friendly agents, which promotes other-regarding preferences, is not supported when offspring move away. Then, offspring are more likely to encounter defectors elsewhere and parents are not ‘shielded’ by their own friendly offspring anymore. In contrast, with local reproduction, offspring settle nearby, and a clustering of friendly agents is reinforced. Under such conditions, friendliness is evolutionary advantageous over selfishness.