How a Vacuum Cleaner REALLY Works

Last winter I wrote an article about the suction in a vacuum cleaner. I got started off on the topic because I read something on Wikipedia that didn't make sense to me. They said a typical vacuum cleaner generates a suction of around 20kPa, or six feet of water. That seemed like an enormous amount of suction, and I quickly did a back-of-the-envelope calculation that showed you would only get about one-eighth of that.

It turned out to be one of my most-read blogposts, and generated a far bit of feedback, much of it supporting my calculation. And yet there were still people telling me that the manufacturers did indeed claim specs of 20-odd kPa, and I couldn't explain it. Maybe those were central-vac systems using multi-stage blowers? I just didn't know.

Last week my wife and I were passing by a little vacuum repair shop at Sargent and Arlington, and she remembered that we needed a filter for our old Hoover. We went in, and the guy there was about 80 years old. I asked him if he knew how much suction you get from a vacuum cleaner? Eighty inches, he said.

I told him it didn't make sense. Assuming a squirrel-cage induction motor and a single-stage blower, I had calculated the maximum pressure to be a mere fraction of that. "Can you show me the blower assembly?" I asked?

The old man went to the back and quickly returned with a blower. It was a universal-type series wound motor (with brushes)...not the induction motor I was expecting. And he poined at the blower housing...it was a two-stage stack, with the first stage feeding the second to double the suction. It looked quite a lot like this: 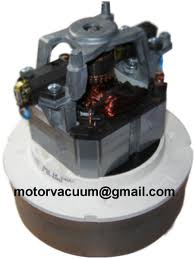 You could see it was a DC series motor because the field windings were the same size wire as the armature windings, which only makes sense when the current has to pass through both in series. There is also something called a shunt motor, but that has a completely different speed-torque characteristic, the significance of which I will come back to later. In the meantime, there it was: a high-speed DC series motor.


This changed everything. I had already done the calculation to show that the maximum practical pressure for a single-stage blower was 10 kPa, based on a peripheral rotor speed of 400 fps (beyond which the steel cage is torn apart by centrifugal forces.) The problem was that with an ordinary induction motor you could never get the rpm's to bring you up to those peripheral speeds. But now I was looking at the motor, and it wasn't an induction motor...it was a series DC motor, and right on the nameplate it said 12000 rpm! The whole thing was designed exactly according to the maximum theoretical parameters, giving 10 kPa suction...and the second stage doubled it again, bringing you to 20 kPa. The problem was solved.

But where did I get the idea that the motor was an induction motor in the first place? Shouldn't I have known the difference? Or at least checked my facts?

Well, I have to plead here "guilty with an explanation". It's been a long time since I opened up a vacuum cleaner, and I remember the motor being pretty hard to get at. And I absolutely don't remember ever having to change the brushes. So I was thinking...no, there's no commutator motor.

But that's not the whole reason. There are two kinds of DC motors...series and shunt. You use a shunt motor in applications where you want variable speed, that you can control with a rheostat. If you want high revs, like a router, you use a series motor. That's what you'd almost expect in a vacuum cleaner.

But there is something funny about a series motor which makes it different from all other motors. If you let the motor spin free, without putting any torque on it, it revs up to a tremendous speed. It's because of something called "field weakening", and it's easy to explain. But I'm not going to get into that here, except to show you the typical speed-torque curve of a series motor: 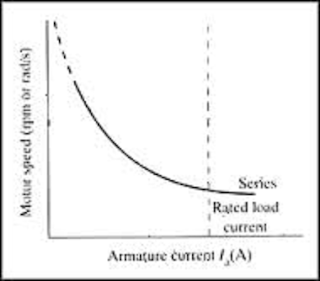 What this graph tells you is that as you follow the curve up towards the left, the speed runs away (the dashed line portion). So how do you test for this on a vacuum cleaner? Easy...you put your hand over the nozzle. I know, I know...it looks like your making the motor work harder because it's fighting againt your hand...but it's just the opposite! The motor works hardest when the airflow is wide open, because now it's doing actual work. When the airflow is blocked off, the motor just spins freely. That's when the speed should run away.

Only it doesn't. Sure, it speeds up a little bit...so will any motor, to a greater or lesser degree depending on the winding design. But certainly not to the extent I would have expected for a typical series motor. So I assumed it was just a common induction motor. Which would limit the speed to 3600 rpm, which would give me a much smaller suction...

So where did I go wrong? How do I explain that it's a high-speed series motor, but you don't see the expected no-load runaway condition?

Answer: Cooling-air bypass! The motor is designed so that even when you cover the suction nozzle, there's still airflow to cool the motor. You can see it clearly on this graph which I downloaded from the Yamomoto Electric Corporation: 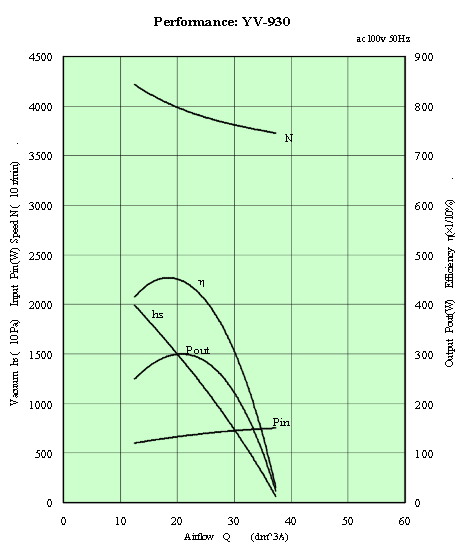 The speed curve is labled N, near the top of the graph, and you can see it doesn't change that much from no-load to maximum. But if you look at the legend on the bottom, you can see that the airflow never goes much below 12 liters/sec, to a maximum of 36. That's because of the cooling-air bypass. There's always a significant load on the motor, and that's why the speed doesn't run away. Which fooled me into thinking it was an induction motor.

On my other blogsite, I just ended a post where I quoted Regis Philbin from "Who Wants to Be A Millionaire". On a similar note, I'm going to end this post by quoting Paul Harvey: