Some conspiracies are real... 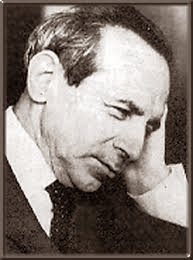 I wrote a while back in Bloomberg about the mystery of how so little has changed in economics and finance, despite the crisis. I mentioned there the great new book, “Never Let a Serious Crisis Go to Waste: How Neoliberalism Survived the Financial Meltdown,” by economic historian Philip Mirowski. It reads a little like a conspiracy theory, as he argues that defense of the academic status quo in economics and finance also serves an array of interests in business and finance for whom the “markets always work best” mantra paves the way to profit. Hence, the profession’s claim that nothing is seriously wrong with economic thinking has found ready allies, especially in conservative and libertarian-leaning think tanks and foundations.

The picture above is of Polish economist Michael Kalecki, who died in 1970. Lars Syll points out that Kalecki had some very wise things to say -- and not all that different from Mirowski -- about the convenience of many "principles" of economics for industrial interests:

Every widening of state activity is looked upon by business with suspicion, but the creation of employment by government spending has a special aspect which makes the opposition particularly intense. Under a laissez-faire system the level of employment depends to a great extent on the so-called state of confidence. If this deteriorates, private investment declines, which results in a fall of output and employment (both directly and through the secondary effect of the fall in incomes upon consumption and investment). This gives the capitalists a powerful indirect control over government policy: everything which may shake the state of confidence must be carefully avoided because it would cause an economic crisis. But once the government learns the trick of increasing employment by its own purchases, this powerful controlling device loses its effectiveness. Hence budget deficits necessary to carry out government intervention must be regarded as perilous. The social function of the doctrine of ‘sound finance’ is to make the level of employment dependent on the state of confidence.