Take a picture of every demo and lab 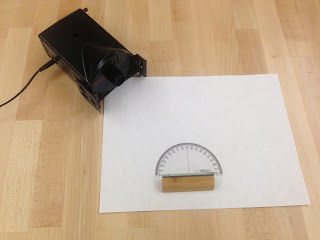 Folks, I've been asked for years:  "Do you have a list of all of the quantitative demonstrations and lab setups that you do?"  I've never actually compiled such a list.  I just create on the fly, usually.  A quantitative demonstration is merely an end-of-chapter problem scaled such that the answer can be tested with available equipment during class.  Each year, I look in the equipment closet, set something up, and go with it.  I *like* the improvisational elements this approach brings to my classes.  Just as I don't want my students to think of laboratory as an object lesson in instruction-following, I don't want to fall into the trap of making physics teaching a strict note-following process, either.
That said, I often want to remember things year-to-year, and I often want to communicate to others what I'm doing.  I've never been organized enough to write down details of my demonstrations.  I've documented many demos on this blog with a photograph and description; but taking and uploading each photo, and then writing the description, has been a time consuming process.
Today, my colleague Curtis offered an elementary yet elegant observation about documenting his demonstrations.  He was frustrated because he didn't remember the experiment that we ran on the first day of conceptual physics last year, even though we had done it in detail last year, even though I described it to him again.  However, when I went into my classroom and actually set up the experiment for him, he instantly knew what to do.
This year, then, he took a picture of the setup with his phone; he emailed the picture to himself, and saved it in a file marked "lesson plans."
See, I hate the term "lesson plan."  It implies that I should have pages of notes explaining what I'm doing in each portion of my class.  Well, I did have such notes the first couple of years I taught.  Now, though, I just set up a demo and improvise.  I don't need no stinkin' "lesson plan" -- The photo BY ITSELF is sufficient for reminding me what I did last year, for communicating to colleagues, and even perhaps for reminding students about setups.  Curtis even suggested using the photo as the basis for a lab quiz:  "Here's the setup from yesterday's demonstration.  Explain how to use the equipment present to measure angles of incidence and reflection."
My pledge for the next couple of years is to remember to take as many pictures of lab setups as I can.  This year I'll work on conceptual; next year will be AP Physics 1.  Hopefully I can compile a big file of picture after picture so that when other teachers ask for a list of demonstrations, I can forward these files.
And yes, I am aware that to folks who are more tech savvy and/or about a decade younger than I, this post must sound like "oh, it's good to have a collection of books, but they're especially useful if you take the books down occasionally and read them."  :-)
GCJ
di 09.01