The Diving Board: A Problem in Structural Theory

When I left off last time, I told you I had gone around asking everybody I could find in Civil Engineering if they could describe the curvature of a diving board. Why do I think this is an important story?

Because no "normal" person would do what I did. I would knock on a professor's door and tell him I needed five minutes of his time to ask an important question. And only one or two told me they were too busy. Or I would go up to students in the lab and tell them I had a special question I wanted them to answer. (And by the way, I didn't target weak students to pad my statistics...on the contrary, I only approached guys I thought were smart.) No one goes around doing that...but I do. And that's why I have a story to tell that no one else has.

But what makes me think MY question was so special? Well, it's like this. I never took structural theory when I was in Electrical Engineering, but there were times when I wanted to do something like estimate the stiffness of an I-beam. And I figured out a way of doing it by assuming that on deflection, it would bend into an arc of a circle...then I could use geometry to figure out the percent deformation, and from Hooke's Law I could calculate the energy change. Then I could go back and equate the (force)x(deflection) to the internal stress energy in the flanges. It was a pretty fair method to get in the ballpark.

Then I got that job working in the Structures Lab, and the first thing I found out was that when you stress a beam, it doesn't necessarily form a circular arc. (DUH!) Why else would we need to glue strain gauges all over the place? And that was Ground Zero for me in Structural Theory.

Then I learned something that amazed me: there is something called the Beam Equation and it is a fourth-order differential equations. I thought Electrical had all the hard math, but we never had to integrate four times. This was something new to me.

I didn't get too far in solving fourth-order equations, but I did notice some special cases which were interesting to me. For one thing, you can indeed bend a bar into a circular arc. That's pretty much what you get if you grasp a bar firmly in both hands and bend it as hard as you can. But in practical structures, that's not the most ordinary situation. A more fundamental case is if you have a bar fixed at one end and you apply a load to the free end. And what I noticed, from doing experiments in the lab, was that the curvature went from zero to 100% as you moved from the free end to the fixed end. And that's the observation I made one day to one of our grad students (who didn't believe me!) that led to the whole business of running around asking people the diving board question.

And for the record, here is how I asked the question. First, I told people that I worked in the lab and we measured everything with strain gauges. Then I said: what do the strain gauges tell us if not the local curvature of the beam? The gauge on top is stretching, the gauge on the bottom is compressing...we read the differential and that tells us how much the beam is curving. I made sure EVERYONE agreed on what we were talking about before proceeding.

Then I drew this picture: 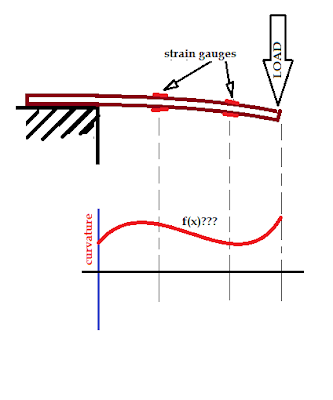 This is the case we want to analyze. Can you sketch a plot showing how the curvature (i.e. the strain gauge readings) varies from one end of the board to another? And then I'd hand them the pencil.

People gave me every possible answer! They'd start at zero and go up...they'd go up in the middle and then come down...they'd curve the graph concave up or concave down...EVERYTHING but the right answer. I think three grad students got it right...one of them was a red-headed girl named Robin (Hutchinson was it?) and I think one of them was an Egyptian named Amr (you really have to trill the "r" to get it right.) But here's the thing...when they got it wrong, I'd tell them the right answer, and they'd say..."no, that's not it" or they'd have some reason like the anisotropic properties of wood that made the simple answer "irrelevant". And a few even said, not without some indignation, that "Engineer's don't need to know anything about curvature!"

How about the professors? I already told you only a minority got it right. There were one or two who were able to reason it out reasonably well, to the point where they were pretty sure that it started at a maximum and decreased towards the right. But most of the ones who didn't know simply didn't care enough one way or the other to even try. I find that shameful. They are professors of civil engineering. Shouldn't they know how a diving board works?

Which brings us to the Structures Group. There were maybe seven profs and I think five got it right. Of these, there were basically two categories...Type A and Type B. Typical of the Type A's was Professor Bruce Pinkney, whose bright shiny dome and beady little eyes (Sorry Bruce, no offense intended but it's so true!) cast a terror.  Pinkney listened to my initial request, and then deadpanned: "I'll give you five minutes". Then he fixed those eyes on me, and while they burned (!) I hurried through my explanation, put the sketch on the board, and extended the chalk to him. He remained seated, raised his right hand above his left shoulder, and made a downward slash to the right. No doubt about it. There was nothing left to say, so I simply left.

What about the Type B's? These included a couple of theoretical profs from India (sorry Ajit, I can't remember their names) who listened to me politely, and then pulled out a scrap of paper, wrote out the fourth-degree differential equations, and then started integrating! Boundary conditions, endpoints...integrate once, integrate again, re-calculate boundary condition, and integrate once more...and there it was: a straight line, slanting down to zero from right to left.

Two very different approaches...and how much they say about the question itself, and how engineering is taught! I was totally onside with Professor Pinkney and the Type A's...my whole way of thinking was that we understand the differential equations by being familiar with certain iconic special cases. For me, that fourth-order equation was meaningless until I saw that the curvature of the diving board was linear going to zero at the end. After seeing that, I could sketch all the integrals and derivatives and see how they all fit into the equation. It made sense!

And what was especially significant to me, and what the University should find troubling, is that those professors (the Type A guys) who acutally knew their stuff...had utterly failed to pass that knowledge on to any of their students!

But what about the Type B professors...those South Asian mathematicians who actually did the integrations on the spot? The horrifying thing is that what they did is what their students are expected to do...on the exams, and by implication, on the job. Now, from a subcontinent of a billion people, you can always find a few hundred with that particular genetic mutation which makes them capable of flawlessly executing that type of abstract mathematics. But what are the chances that a typical Canadian engineering student is going to be able to do that on the job? As a practical way to teach young engineers how to analyze structures, it is a cruel joke. But that's our system. I can tell you that of the three students who got it right, they all did it as Type A's...and of the ninety-seven who got it wrong, not one of them even attempted to do it as a Type B! (Although a couple of the profs who got it wrong did!).

There is a post-script to the story. Some weeks later, I found out that there was a way to ask the question so that everyone got it right. My problem was that I was talking about diving boards and strain gauges, trying to put it in practical terms so that everyone knew what we were talking about. WRONG. If you want to get the right answer, you have to treat the students like Pavlov's Dogs, and geve them the right stimulus. You have to say these magic words:

"Sketch the bending moment diagram of a simple cantilever beam."

And then they all do it flawlessly, without a second thought.