It has been a while since I last wrote a blog post here, mainly because although I have so much to say I'm never quite sure where to begin However, I have an awful lot to say about Twitter and my experiences with it and in light of Monty Don's piece in Gardeners World magazine I thought now would be as good a time to say it as ever.
Primarily, as it appears to me, Monty is not comfortable with social media per se. He says that the sound of silence is the best sound of all, which may be true for him, but certainly is not for many, including often me. He also says that he thinks the reason there are few Twitter gardeners are that most gardeners fall into the over 50 age bracket and so are not comfortable with computers, a point that has very beautifully been written about by Sue Beasley at www.lodgelanenursery.blogspot.co.uk. But mainly the piece is not one which might make you join Twitter and certainly doesn't tell of the amazing gardening community that is there.
So let me tell you about my Twitter experience. When I first joined Twitter I was working at an awe inspiring nursery as a grower and manager and although I loved my job, was being bullied within the workplace and suffering as a result of that. I joined Twitter on a whim, and then realised that there were lots of gardeners there, both well known and not, who were sharing information and photos and generally being as gardeners usually are- nice! One of the first conversations I had was with James Alexander Sinclair, which nearly made me fall off my chair with astonishment. And so I got drawn in, spoke to people, the same people very regularly as well as others not so often. I was lucky in that I worked at a nursery which always had a stand at Chelsea and so every year people would come along and visit me at the stand and we would disappear off for coffee, chats and general friendliness. I met people that I had spoken to on Twitter because whether in life or behind a computer screen you vere towards your type of person, your type of friends. I can honestly say I have never met anyone from Twitter with whom I didn't instantly connect, and they have been gardeners and non-gardeners.
So that is all positive but it goes further. Twitter is an excellent marketing tool and that works in two ways. People use it to sell their business or themselves, but they can also find people who can enhance their businesses. If it wasn't for Twitter and the wonderful @TheFlowerFarmer, aka Georgie Newbery, I would never have given my first workshops and if it wasn't for the amazing @EmmmaB I would never have had the confidence to go out there and become the self employed person I am today. In fact I am just now beginning a new venture with a fellow Tweeter which would never have happened if we hadn't met through Twitter and then met-follow @SomersetFlowers for more!! 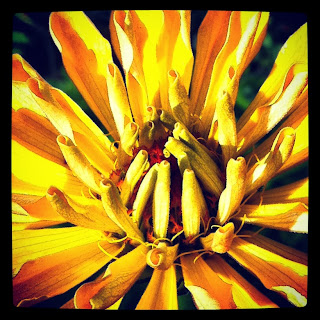 If I hadn't met a wealth of people on Twitter who respect me for my knowledge and experience as I do them for theirs, I can honestly say my life would be very different today, and I know in a negative way. Twitter has given me confidence, picked me up when I've been down, joined in when there have been things to celebrate, held my hand in times of stress and offered support in times of need. I have met, broken bread with, in real life, probably more than 100 of the people I regularly tweet with, and have formed what will be lasting friendships. I would never have met these amazing folk without Twitter.
But Twitter has taught me things too. It has taught me the importance of being nice, of offering help and support to others who are in need and never being afraid to be there for others as they are for you. It has also taught me that my knowledge, understanding and experience of gardening and the horticultural world is there to be shared, which I love to do. And it has given me the confidence to shout out if I have issues with things which brings me on to #shoutyhalfhour.
The last paragraph of Monty's article alludes to people being rude to him via Twitter. #Shoutyhalfhour is most certainly not anything personal towards him, but is a light hearted, mainly, and occassionally irritated, look at Gardeners World through the eyes of people for whom, as a programme, it simply does not work. We won't go into the whys and wherefores here, but that hashtag alone shows there is an enormous gardening community on Twitter, many of whom join in and some of whom don't. But it is proof that they exist. And following a short episode when Monty followed me, I am aware that he is aware of it. The cynic in me says his article actually is saying that "nothing to see here, move along", which would be sad as the more knowledge that we can find on social media sites the better as far as I can see.
So my advice to people is this. Join Twitter, join in with conversations, be genuine and it will enhance your life at the very least and if you are as lucky as I have been, and allow it to, it will change your life forever.