Cleaning up finance? That WOULD be a surprise 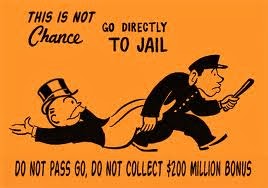 Several things worth reading that give tiny rays of hope that one day we might get some regulations with real teeth to reform the financial system.

First, some remarks by Kenneth C. Griffin, the founder and chief executive of Citadel, giving his views that the big banks should be broken up, or laws changed to encourage the flowering of smaller banks with competitive advantages on the local level (he mentions in particular putting caps on the size of deposits).

Second, an essay by law professor Peter Henning who is a specialist in financial fraud and enforcement. He gives a look at how developments such as derivatives and high frequency trading have created a host of opportunities for sophisticated market manipulation, but also how some recent legal changes have given regulators more power to pursue actions even if they cannot prove "intention to manipulate."

Third, an extended article looking at how things are developing with the so-called Volcker Rule that would, ostensibly, prohibit investment banks from trading on their own proprietary accounts. This gives a mixed message, actually, and it even seems that some of the regulators are part of the problem. Look at the second sentence below:

Gary Gensler, head of the Commodity Futures Trading Commission, also wants to make it harder for banks to disguise speculative wagers as permissible trading done for customers, according to the officials briefed on the discussions. Underscoring the tension, other regulators privately groused that Mr. Gensler’s agency — which spent most of the last few years completing dozens of other new rules under Dodd-Frank — was too slow to raise concerns about the Volcker Rule.

Finally, a great speech by Elizabeth Warren on why Too Big To Fail remains a very serious prpoblem even five years after the worst moments of the crisis. Some excerpts below: