The macho of rationality 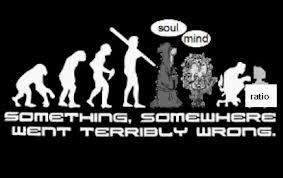 There seems to be a strange communal notion in the economics profession that one should always try to get by with the idea of complete human rationality; that any weakening of this assumption in one's theory is unseemly and more or less tantamount to cheating, as if you're not keeping a stiff upper lip and soldiering on like the rest of your colleagues who are trying to explain things with the rationality handicap fully in place and without making any concessions to reality. I don't know why economists don't agree to theorize with one hand tied painfully behind their back, or maybe with red hot needles inserted into their eyes, just to make the competition even tougher. The best economist is the most macho.

I recall seeing this attitude expressed forcefully in a paper from several years ago by UC Berkeley finance professor Mark Rubinstein. I wrote about that here and I might as just quote one bit:

"Rubinstein asserts that his thinking follows from what he calls The Prime Directive. This commitment is itself interesting:

When I went to financial economist training school, I was taught The Prime Directive. That is, as a trained financial economist, with the special knowledge about financial markets and statistics that I had learned, enhanced with the new high-tech computers, databases and software, I would have to be careful how I used this power. Whatever else I would do, I should follow The Prime Directive:

Explain asset prices by rational models. Only if all attempts fail, resort to irrational investor behavior.

One has the feeling from the burgeoning behavioralist literature that it has lost all the constraints of this directive – that whatever anomalies are discovered, illusory or not, behavioralists will come up with an explanation grounded in systematic irrational investor behavior.

Rubinstein here is at least being very honest. He's going to jump through intellectual hoops to preserve his prior belief that people are rational, even though (as he readily admits elsewhere in the text) we know that people are not rational. Hence, he's going to approach reality by assuming something that is definitely not true and seeing what its consequences are. Only if all his effort and imagination fails to come up with a suitable scheme will he actually consider paying attention to the messy details of real human behaviour."

There are multiple things I fail to get about this, the first being that this is not actually a good way to explain anything. Think of this. Suppose you observe some real world thing X (some market behavior) and you want to explain it. You assume A (rationality), build a model, and show that X comes out. Great! But then, your explanation really only hangs together is A is true. If someone rightly objects that A isn't true, then you've really explained nothing. The mystery stands: how is it that in a world in which A is not true, X can happen? You might say "well, A is almost true, so this is an approximate explanation." Maybe, but it would then be much better to go back and try again with assumption B (people are fairly rational with shortcomings of this or that specific sort) and show that X comes out. That would be an explanation one could believe. Rubinstein's presciption holds that this should only be a last resort, perhaps an admission of defeat. Oddly, the Prime Directive, it seems to me, holds that economists should stop seeking an explanation before they've actually found one (at least in cases, as is typical, in which A, rationality, is not true..... in really simple cases in which that assumption is plausible, games of tic-tac-toe and such, then sure.)

Anyway, Floyd Norris has a nice essay today touching on the thoughts of Ben Bernanke, Steve Keen and others, and exploring various topics including the widely held delusion prior to the crisis of how stability and efficiency were guaranteed by the wonders of modern financial engineering. As part of it, Bernanke makes more or less the same statement as Rubinstein (I've put it in bold, part way down):

The intellectual framework [FED economists prior to the crisis] used simply could not cope with the idea that financial stability can itself become a destabilizing factor, as investors and bankers conclude that it is safe to take on more and more risk.

For a time, the period before the collapse was known as the “Great Moderation,” a term that Mr. Bernanke helped to publicize in a 2004 speech. Low levels of inflation, long periods of economic growth and low levels of employment volatility were viewed as unquestioned proof of success.
And what brought on that success? In 2004, Mr. Bernanke, then a Fed governor, conceded good luck might have helped, but his view was that “improvements in monetary policy, though certainly not the only factor, have probably been an important source of the Great Moderation.”
In 2005, three Fed economists, Karen E. Dynan, Douglas W. Elmendorf and Daniel E. Sichel, proposed an additional explanation for the Great Moderation: the success of financial innovation.
“Improved assessment and pricing of risk, expanded lending to households without strong collateral, more widespread securitization of loans, and the development of markets for riskier corporate debt have enhanced the ability of households and businesses to borrow funds,” they wrote. “Greater use of credit could foster a reduction in economic volatility by lessening the sensitivity of household and business spending to downturns in income and cash flow.”
At least Mr. Bernanke’s hubris was not as great as that of Robert E. Lucas Jr., the Nobel Prize-winning University of Chicago economist. In 2003, he began his presidential address to the American Economic Association by proclaiming that macroeconomics “has succeeded: Its central problem of depression prevention has been solved.”

In his speech last week, Mr. Bernanke cited several assessments of the Great Moderation, including the one by the Fed economists. None questioned that it was wonderful.
The Fed chairman conceded that “one cannot look back at the Great Moderation today without asking whether the sustained economic stability of the period somehow promoted the excessive risk-taking that followed. The idea that this long period of calm lulled investors, financial firms and financial regulators into paying insufficient attention to building risks must have some truth in it.”
One economist who would have expected that development was Hyman Minsky. In 1995, the year before Minsky died, Steve Keen, an Australian economist, used his ideas to set forth a possibility that now seems prescient. It was published in The Journal of Post Keynesian Economics.
He suggested that lending standards would be gradually reduced, and asset prices would rise, as confidence grew that “the future is assured, and therefore that most investments will succeed.” Eventually, the income-earning ability of an asset would seem less important than the expected capital gains. Buyers would pay high prices and finance their purchases with ever-rising amounts of debt.
When something went wrong, an immediate need for liquidity would cause financiers to try to sell assets immediately. “The asset market becomes flooded,” Mr. Keen wrote, “and the euphoria becomes a panic, the boom becomes a slump.” Minsky argued that could end without disaster, if inflation bailed everyone out. But if it happened in a period of low inflation, it could feed upon itself and lead to depression.
“The chaotic dynamics explored in this paper,” Mr. Keen concluded, “should warn us against accepting a period of relative tranquility in a capitalist economy as anything other than a lull before the storm.”
When I talked to Mr. Keen this week, he called my attention to the fact that Mr. Bernanke, in his 2000 book “Essays on the Great Depression,” briefly mentioned, and dismissed, both Minsky and Charles Kindleberger, author of the classic “Manias, Panics and Crashes.”
They had, Mr. Bernanke wrote, “argued for the inherent instability of the financial system but in doing so have had to depart from the assumption of rational economic behavior.” In a footnote, he added, “I do not deny the possible importance of irrationality in economic life; however it seems that the best research strategy is to push the rationality postulate as far as it will go.”
It seems to me that he had both Minsky and Kindleberger wrong. Their insight was that behavior that seems perfectly rational at the time can turn out to be destructive. As Robert J. Barbera, now the co-director of the Center for Financial Economics at Johns Hopkins University, wrote in his 2009 book, “The Cost of Capitalism,” “One of Minsky’s great insights was his anticipation of the ‘Paradox of Goldilocks.’ Because rising conviction about a benign future, in turn, evokes rising commitment to risk, the system becomes increasingly vulnerable to retrenchment, notwithstanding the fact that consensus expectations remain reasonable relative to recent history.”